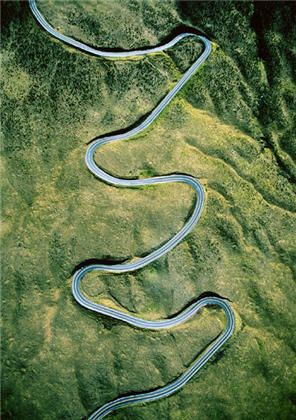 An aerial view of SCP-704 during an active phase.

Entry to SCP-704 is not allowed by any wheeled or treaded vehicle, though attempting to do so is, for the most part, its own punishment. Entry is only allowed on foot with previous clearance from one (1) Level Three (3) administrator.

Should a vehicle gain entry to SCP-704, personnel are to wait approximately 2 hours before attempting to recover any bodies or the driver. This is to guarantee personnel safety as the actions of both the driver and SCP-704 are unpredictable during an active phase.

SCP-704 is a loop of winding road breaking off and reconnecting to State Highway 96 in the ███████ National Forest. The loop does not appear on any conventional or electronic maps, and satellite surveillance is made difficult by an inability to focus on the affected area.

SCP-704 has a passive and an active phase. The passive stage can only be observed by those traveling by foot. During the passive stage, SCP-704 appears to be a winding, static road littered with the remains of vehicles. Remains of vehicles are not observed during its active phase. The exact topography and distance of the route remains constant between active periods. After an active period, topography and distance change to a new configuration.

Once a driver has entered SCP-704, it begins its active phase. The active phase has been observed via remote cameras mounted to vehicles entering SCP-704 as part of various experiments. The first sign of the active phase is an increasingly excited disposition on the part of the driver. As the road becomes more challenging, the driver will begin to declare how much fun the road is and prod the passengers to watch his or her driving skills. Passengers show a uniform negative reaction to the road, exhibiting anxiety, paranoia, and fear.

The road becomes increasingly more challenging, with mounted cameras recording the route actively changing in front of the vehicle. Several highly improbable road configurations have been observed including:

The general appearance of the road and landscape changes as well, manifesting paved roads and dirt roads of varying degrees of quality. The driver’s excitement and the negative reactions of his passengers will increase, until the driver loses control of the car and crashes. A crash has never been recorded on camera, as all recording devices cease functioning before the event.

This crash has consistently resulted in the deaths of all passengers but the survival of the driver. Passengers are generally found close to the crash, with injuries consistent with forcible ejection, although no signs of this are present on the vehicle wreckage. Interestingly, they are also generally recovered fused with local objects at a molecular level. No matter the severity of the crash, drivers will be recovered with nothing worse than scrapes and bruises. Drivers only retain partial specific memories of the time spent on SCP-704, but are always acutely aware that they have just been responsible for their passengers' deaths.

Addendum 704-01 Interior monitoring devices have shown that most drivers begin to speak to the road and respond as though it is communicating with them. The conversation is always about the passengers and usually results in peals of manic laughter from the driver, but has been recorded to produce anger as well.

It is unclear whether SCP-704 is actually communicative or sapient. Due to the personality changes during an active event and partial retrograde amnesia after, all potential interview attempts have failed.

Addendum 704-02 On 04/09/2009, D-4701, a member of the █████ ██████ biker gang, was selected to determine the effect of SCP-704 on a single-occupant vehicle. He was given a motorcycle with a remote-activated kill-switch and instructed to traverse SCP-704. In this case, SCP-704 changed to lead D-4701 directly through the guardhouse at the opposite end, killing the two observing researchers. Future experimentation on SCP-704 with single-occupant vehicles is discouraged.