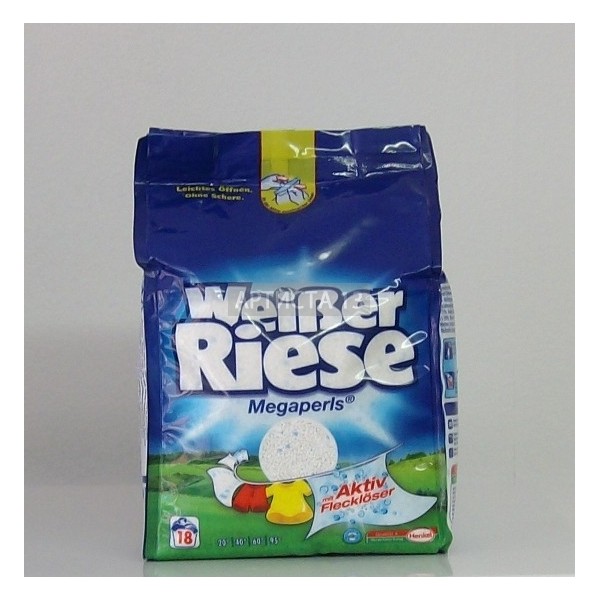 SCP-692 in its original packaging, as procured by the Foundation

Security personnel present at testing are to be equipped with standard-issue gas-based flamethrowers.

SCP-692 comprises 57 packages of "Weisser Riese" washing powder secured by the Foundation from a general store in ██████, Czech Republic, and several households nearby. All of the packages belong to the ████/███ production series.

When an article of clothing exposed to SCP-692 comes into uninterrupted contact at least fifteen (15) minutes long with a living, multicellular organism, within following four (4) to fifteen (15) hours, the article, (referred to as SCP-692-1) will spontaneously animate. An instance of SCP-692-1, observed at the house of H███ P█████. The nucleating article were the trousers.

SCP-692-1 at this stage show the contours of the imprinting organism, although bisection of several instances of SCP-692-1 has revealed that the inside of such contour contains air at ambient pressure.

Through an as-of-now unknown mechanism, SCP-692-1 is capable of locomotion, manipulation of objects, and at times, accretion of more articles of clothing into its mass. Furthermore, SCP-692-1 with a single "nucleating" item will behave as a single entity, even if there is no physical connection between the items (see accompanying photo-documentation).

The mode of behaviour of SCP-692-1 depends on the length of exposure to the imprinting organism, longer times resulting in a higher quality of simulation - approximately three hours of uninterrupted contact are sufficient for the imprinting of most mammals.

SCP-692-1 are unaffected by most mechanical damage, and as such, incineration is the recommended method of disposal.


ITEM: 0.5m x 0.3m sheet of cloth
IMPREGNATING AGENT: A housecat
EXPOSURE TIME: 15 minutes.
RESULT: Two hours after impregnation the sheet has wrapped itself as if enveloping the body of a housecat of equal size to the impregnating agent. Resulting SCP-692-1 showed no traces of animation. Cutting resulting SCP-692-1 into several segments produced no adverse effects. Resulting SCP-692-1 was subsequently incinerated.


ITEM: 0.5m x 0.3m sheet of cloth.
IMPREGNATING AGENT: A housecat.
EXPOSURE TIME: three (3) hours.
RESULT: One and half hours after impregnation, the sheet has wrapped itself as if enveloping the body of a housecat of equal size to the impregnating agent. Resulting SCP-692-1 has exhibited behaviour consistent with that of the impregnating agent. When presented with a live mouse, resulting SCP-692-1 appeared excited, and proceeded to capture and kill it. Resulting SCP-692-1 isn't adversely affected by machine-washing, though doing so appears to anger it. This instance of SCP-692-1 currently resides within the office of Researcher E████████.


ITEM: A standard D-class jumpsuit.
IMPREGNATING AGENT: D-835 , a 25 year old white male.
EXPOSURE TIME: three (3) hours.
RESULT: Two and half hours after impregnation, the jumpsuit appeared as if filled with a human body. The resulting SCP-692-1 became active when approached, slamming present technician into a wall, and attempting to escape the test room. Resulting SCP-692-1 failed to escape as its lack of digits didn't allow for manipulation of door mechanisms and was subsequently incinerated by security personnel.