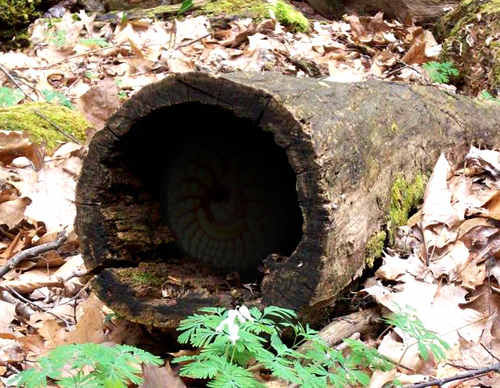 SCP-688 nesting in the wild

SCP-688 is active in the wild. Specimens are retrieved by Mobile Task Force Theta-13 (“Land Sharks”) as uncontained nests are identified. A nested SCP-688 should be retrieved in darkness, by agents provided with night-vision equipment, and should be moved only by removal of the entire nest, including whatever physical structure is required to keep the nesting area enclosed and intact. The nest will be enclosed in an opaque light-proof container and be transferred and installed in the SCP-688 warehousing facility at Site-██.

The SCP-688 warehousing facility shall provide an open area of at least 5000 square meters protected from outside illumination, and each SCP-688 nest contained within shall be covered with a secondary light-proof enclosure that should only be removed for testing and feeding of SCP-688. Each individual SCP-688 will be fed an amount and on a schedule as specified by the researcher in charge, though biomass fed to SCP-688 should include at least 25% living tissue to discourage SCP-688 from abandoning its nest. These criteria can be waived for testing at the discretion of the site director.

SCP-688 is an animate, apparently living, entity that shares many gross morphological similarities with Ichthyomyzon castaneus (Chestnut Lamprey). However, it differs in several key respects: SCP-688 has no external sensory organs, gills, or cloacal openings. SCP-688 is also much larger and varies considerably more in size, ranging from 10cm to over 200cm in length. SCP-688 is also found in a more varied habitat, and has been found as far south as [REDACTED] and as far north as [REDACTED], above ground, in burrows, as well as underwater.

Unlike Ichthyomyzon castaneus, SCP-688 is an ambush predator rather than a parasite. SCP-688 will inhabit a nesting site that conceals its body from the light and anchor its mouth to an external opening. While in the nesting site, SCP-688 does not move, and will consume all biological matter that enters the opening. These nesting sites can be naturally occurring or man-made, as long as there is limited light exposure and some minimal biological matter entering on a periodic basis. (The more biological matter, the greater SCP-688’s tolerance for some illumination.) No example of SCP-688 has been discovered outside an active nesting site, and it is unknown how (or even if) these entities move in the wild, or how they find sites to nest in.

To date, SCP-688 nests have been discovered in animal burrows, fissures in rock formations, hollow logs, drainage pipes, gutter downspouts, garbage disposals, shoes and other articles of clothing, inside the engine block of an abandoned Buick Century, and inside [REDACTED]

Once any biological matter enters SCP-688’s mouth, inward-curving teeth will seize it and pull it into the SCP-688’s digestive tract with enough force to pull in prey substantially larger than either SCP-688’s apparent size or the diameter of its nesting site. Matter seized by SCP-688 has proved impossible to retrieve; SCP-688 will continue pulling until it forces the entire prey organism through the nest opening (A 68kg Great Dane was observed being pulled through a 20cm pipe in less than three seconds.) or until the prey organism’s body suffers mechanical separation from the part being consumed. (During an experiment, one D-Class personnel placed her index finger into an infected light socket. In 1.8 seconds she lost her left arm to the elbow and suffered a degloving injury up to the shoulder, at which point her elbow-joint separated and she fell back from the nesting site.)

SCP-688 is able to ingest an apparently unlimited amount of organic material without excreting, changing in size, or gaining any mass. This is apparently due to a digestive system that leads to an extra-dimensional organism. This also leads to SCP-688’s novel method of escaping from perceived threats. If exposed to bright light, or if dislodged from its nesting site, its mouth will retreat inside, pulling SCP-688’s outer skin after itself. As it does this, SCP-688’s body will appear to reduce in volume in a manner that has been described as “an empty balloon turning inside out", or “a sock rolling in on itself". This will continue until SCP-688 disappears completely. Such events under Foundation control are considered containment breaches and will be disciplined if not occurring as part of an approved experiment.

On 8/7/19██ Foundation agents became aware of a possible SCP active in ███████, Mexico when they intercepted police reports of several violent deaths. The victims were all male and, with the exception of one decapitation, shared similar injuries. The victims' genitals had been forcibly removed along with several pounds of other tissue (in one case this missing tissue included the prostate, bladder, kidneys, and several feet of intestine) causing death by exsanguination.

The investigating agents traced the victims to a local brothel, where it was determined that the victims [REDACTED] When confronted, Mrs. ███████ admitted to killing the men, showed no remorse, and claimed [REDACTED] The investigating agents were not immediately aware of the possibility of SCP-688 involvement and captured her in accordance with standard protocols for medium-risk humanoid SCP recovery.

Once in Foundation custody, examination discovered a 28cm long SCP-688 had nested within Mrs. ███████, partly displacing and distending the uterus. Mrs. ███████ could not provide any insight into its origins.

It has been theorized that because Mrs. ███████ is post-menopausal, and therefore does not run as high a risk of infection from blockage of the birth canal, she may be able to survive the SCP-688 infestation indefinitely. The site director has authorized testing this hypothesis.

With restraints, sedation, and periodic feeding, Mrs. ███████ has survived for the past ██ years.