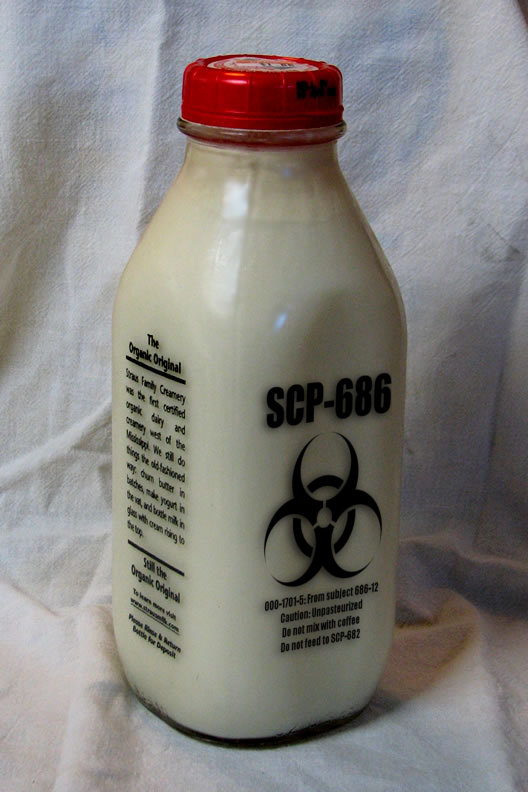 Samples of SCP-686 are to be stored under standard protocols for class 2 biohazardous liquids in G2 facilities. SCP-686 is infectious but not virulent. It can only afflict a new host when taken orally, and is not motile or otherwise 'active'. The infectious agent's mechanism of operation is not known. SCP-686 does not contain appreciable amounts of nucleic acids and prion activity is not apparent.

Due to the large quantities of SCP-686 that are being produced by various test subjects, the principal requirement for this substance is not so much containment as it is disposal. While pasteurization has proven completely effective at sterilizing the infectious agent, whatever its nature, it is recommended that all unneeded stocks of SCP-686 should be incinerated. Human consumption is not recommended by anyone other than designated test subjects.

SCP-686 is an opaque white liquid consisting of a suspension of lipids and proteins that is indistinguishable from ordinary high-grade dairy milk without detailed analysis. At a biochemical level there are certain subtle differences: the protein content is much more complex, with most of the peptides so far proving difficult to sequence, and it contains a richer blend of vitamins and minerals than is typical of cow's milk.

SCP-686 was first isolated from cattle at a small-scale commercial dairy farm near ██████. Records indicate that the farm's herd began increasing its milk output and quality to unusually high levels approximately two years before the infection managed to make the jump to the farm's human workers and the Foundation became involved. It is not known with certainty whether this farm is where SCP-686 originated or if it came in from some other source and was simply first recognized there.

The infection increases the host's lactation rate, or if the host is not lactating causes it to begin doing so. It appears that any mammal is susceptible to infection regardless of gender. The initial symptoms of the disease have a rapid onset but are relatively minor: swelling of mammary gland tissue (causing breast development in males) and increased sensitivity of the nipples in both males and females. On average a human of either gender in this stage of the disease will produce between 0.5 and 1 liters of milk per day. If this milk is extracted on a regular basis, with milking intervals of no less than once every eight hours, the disease appears to remain stable indefinitely in this state. Milking can be performed with a standard breast pump.

If a host is not milked adequately, mammary glands continue to develop. Left unchecked, this development will diverge from normal human growth patterns: rather than remaining confined to a single pair of breasts, it will begin spreading down the front of the chest and abdomen. Additional pairs of nipples will develop along the way and the nipples will lengthen and thicken dramatically. The eventual result resembles an enormous fleshy udder stretching along the entire front of the torso, with between six and eight pairs of teats. A human at this stage can produce upwards of forty liters of milk per day. This is the maximum extent to which the disease will progress in humans.

The metabolic demands of such a large and productive glandular system are considerable and a human victim in this state will find him or herself preoccupied with eating most of the time. With his or her energy fully devoted to milk production the victim will often suffer from a general state of mental dullness and docility. Surgical removal of mammary tissue is a temporary measure as the disease is able to cause regrowth even if all of it is excised.