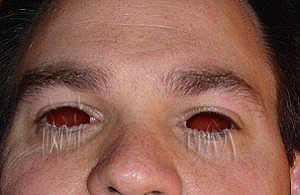 Subject in the later stages of infection

To prevent potential cross contamination at no point should samples of SCP-679 and SCP-1077 be stored at the same facility.

SCP-679 is a fungal infection of a previously unknown Aspergillus species. It was discovered among the local homeless population in ███████, Florida.

It is highly infectious through direct contact with the fungus, though other means of transmission have not been ruled out.

In early stages, subjects complain of entoptic phenomena. Subjects report seeing tiny bright dots moving rapidly in their field of vision. This is especially prevalent when sneezing or looking into strong blue light.

After approximately one week from initial exposure, the sclera turns black. The subject loses vision at this time, becoming entirely blind. Within a day of this, small ulcerations appear in the corners of the eyes. This causes the vitreous humor to begin leaking out, having the appearance of thick black tears.

Mycelia are also pushed through the ulcerations. Each mycelium resembles a thin white thread coated with slime, reaching as long as twenty-five centimeters. As the ulcerations widen and more of the humor leaks out, more mycelia appear.

At this stage, the eye begins to rot entirely, a process sped up by the fungus. However, it seems to protect the rest of the eye socket and the nerve, preventing infection by other pathogens in eighty to ninety percent of test subjects. By the time the eyes have gone entirely, the sockets are filled with the fungus, with a thick mass of mycelia hanging from the empty sockets. This process takes approximately two weeks from the time the ulcerations appear.

Once the eyes are completely gone, mycelia invade the sinuses, where they trigger increased mucus production, which the fungus appears to feed upon.

At this stage, the fungus becomes mobile, the individual threads gaining motility. They move around the subject's face in seemingly random patterns.

Once the fungus begins moving on its own, subjects report their vision returning. The fungus appears to have photosensitive cells, as well as a currently poorly-understood ability to interface with the optic nerve. Subjects describe normal (and in some cases improved) eyesight, except for a much wider field of vision.

However, whenever a human with apparently normal eyes enters their field of vision, subjects experience visual hallucinations (fires, dangerous animals, sudden tilts in the floor) that seem designed to drive them in the direction of the uninfected. Once they are in range, the mycelia reach out to touch the uninfected human's eyes. This appears to be a reproductive strategy for the fungus.

Curing the condition has so far been possible only in the earliest stages of infection. Once the sclera changes, the only treatment is surgical intervention and cauterization of all tissue in the socket and sinuses.

Additional test subjects to explore the lifecycle and reproduction of SCP-679 are requested.