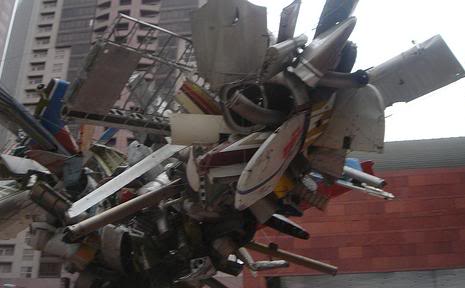 SCP-665, prior to containment

SCP-665 is not to leave his room under any circumstances barring a full site evacuation, in which instance a specially designed stainless steel crate has been constructed. SCP-665’s room is to be constructed entirely of stainless steel or a similar metal. SCP-665’s bed is to consist of a single mattress, specifically constructed to have a mass greater than 1000 kg. SCP-665 is only to be fed a specially formulated liquid diet, which is to be dispensed into the drinking glasses fused to his hands. SCP-665 is allowed access to live animals, provided that said animals are not wearing a collar or other similar adornment, and that he does not attempt to feed said animals.

Physical contact with SCP-665 is highly discouraged. If it becomes necessary, it is to be done with bare skin only, and to be kept to a minimum.

SCP-665 is a human male, age ██. All of this information, including his species, was obtained through an interview. He has refused to provide further information (see addendum). Further physical descriptions cannot be given at this time, as SCP-665’s external appearance changes frequently. Any non-living solid object with a mass less than that of SCP-665 that comes in contact with SCP-665’s body instantly fuses to it. Within one hour, the object will effectively become part of SCP-665’s body, and will affect smaller objects in the same manner. It is worth noting that this means SCP-665's mass increases with each item added; therefore, all personnel are advised against adding any further objects.

Surgical analysis of SCP-665 has proven difficult, as most surgical instruments are simply assimilated into his body. The few items isolated from SCP-665 via a bisecting laser have revealed that SCP-665’s cardiovascular system had expanded to include these items. Furthermore, although these items retained their original appearances, their inherent chemical properties more closely resembled those of human flesh.

It is not presently known how SCP-665 was able to obtain nourishment prior to containment, as the aforementioned drinking glasses were added by the Foundation specifically for the purpose of containing liquid nourishment.

Addendum: SCP-665 has recently proven to be largely uncooperative with Foundation personnel, refusing to answer questions or submit to examinations. While SCP-665 has not shown any signs of violence, it must be stressed that personnel are expressly prohibited from introducing any item to SCP-665 that may conceivably be used as a weapon.