The Floor to Nowhere 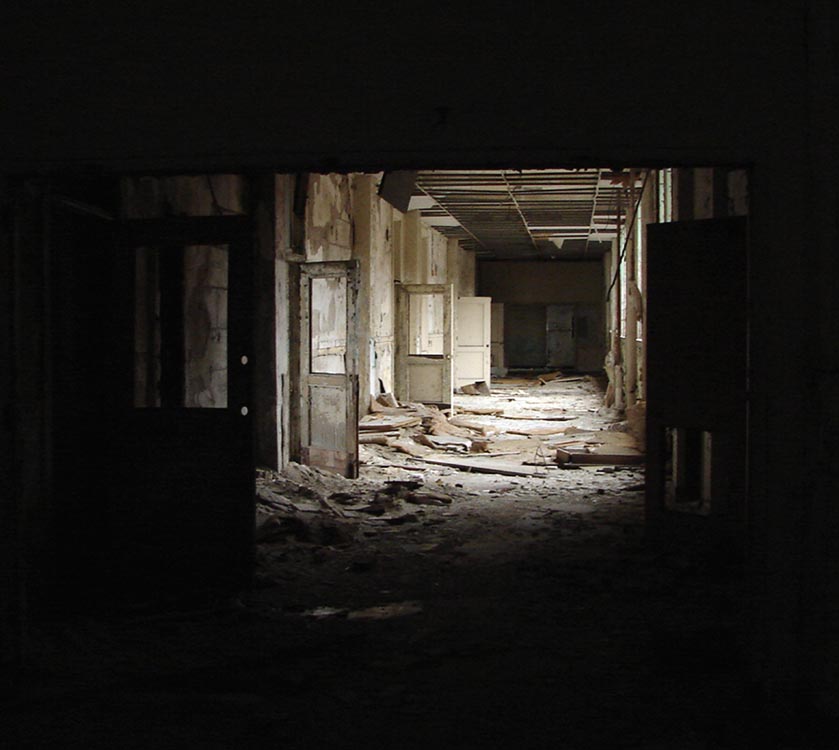 SCP-664, viewed from the southern entrance to the third floor.

Protocol G-3-16-U (containment of geographically immobile anomaly, urban subset) is to be followed, with a containment perimeter established at the property's boundary.

Testing is disallowed at this time.

SCP-664 is an anomaly affecting the approximate area contained by the third floor of ███████ High School in ███████████, Pennsylvania USA. SCP-664 is invisible to all observation and measurement thus far attempted, and is discernible only by its effect on living biological organisms.

Living biological organisms (tests 5-12 detail species tested to date) crossing the approximate outer edge of SCP-664 are invariably subject to spontaneous and instant disappearance shortly after full immersion into SCP-664's area of effect. Testing to date has yet to satisfactorily establish whether time, distance, or other factors dictate the exact moment of disappearance. Non-living material, including clothing and equipment, are not affected by SCP-664's effect.

SCP-664-1 is the collective term for any living biological organisms that re-emerge from SCP-664. To date, 67% of biological organisms entering SCP-664 have subsequently returned, with a higher and lower proportion for sapient and non-sapient organisms respectively. To date, the time recorded between disappearance and return ranges from 43 seconds at the lowest limit, to 142 days at the highest.

Returning instances of SCP-664-1 have thus far been unable to provide descriptions of their experience during their period of absence.

On ██/██/1999, routine intake DNA testing of D-48120 produced a match with Researcher Daniel Ambridge, of Foundation employment since 1972, presently engaged in study of SCP-████. Both were placed under high-level covert surveillance. On ██/██/1999, D-48120 was assigned for testing of SCP-664. On ██/██/1999, Researcher Ambridge requested a transfer of assignment to SCP-664, which was approved following consultation with Foundation Internal Monitoring Group ███ ███ ██████. Following entry into SCP-664 by D-48120, and subsequent non-return after 300 days, Researcher Ambridge was detained for questioning.

Ambridge: I'm pleased that you intervened when you did, and not before. I had been worried about what would have happened to me if you had stopped him.

Ambridge: That's right. Myself, I should say. He didn't believe me at first. Would you believe it? But it didn't take long to wear him down, sharing some of our memories that nobody else knew about, about that Karen girl, about some of the crimes we knew nobody else knew about, about some of the nasty little details that I'm ashamed to admit to now. I was an unpleasant man back then, bound for death. This whole twist of fate gave me a fresh beginning and a head start to do something good with my life. I'm glad to have had the opportunity.

Stephenson: Describe again for me what you experienced following your entry into SCP-664.

Ambridge: What more can I add? It was a long time ago, but I remember it quite well. One moment I'm there, in the old school with the older me standing with his colleagues, watching and waiting with cold professionalism, hiding the collusion I knew he had underneath. All those days in my cell with him talking me through every little detail of the Foundation, what I needed to do when I popped out the other side, how I needed to act and think. It was all a lot to take in.

Apologies, you were asking about what happened when I stepped through? I'm afraid it's just like all the others: just nothingness. How I came out, though, that was different I grant you. One moment there, the next I'm naked and frightfully cold, falling into the hay wagon, just as my older self had described, every little detail. I found some clothes and made my way to █████, and dear old Elsie was there just like he said she would be. A stranger to me then, of course, but she took me in, and from there I followed the path he set out for me, until the day came when I realized I could no longer tell where I had ended and he had begun. It was my turn to fulfill his half of the story. And my dear Elsie, she never knew that I had help getting into her heart, that I knew all along that our life together was destined. Excuse me a moment.

Apologies again. It doesn't do to get emotional, I know. May I ask, why did nobody stop me? If you've been watching all this time, surely you must have known I was preparing him, feeding him information, about the Foundation, about my life and how to work his way to become me. I loaded him up with so many secrets. Wouldn't all that be far too much of an unacceptable information breach?

Stephenson: I am not in a position to say.

Ambridge: Yes, of course. Still, I can hypothesize. I'm pleased to see that the Foundation care more for the preservation of causality than of securing their secrecy.

Stephenson: Again, I am not in a position to say.

Ambridge: So what happens now?

Stephenson: I am not in-

Ambridge: Alright, I understand. I dare say I have little to complain about. Not every D-class gets a chance to become an old man. Thank you. And I mean it, thank you so very much, for everything.

Event: At 2pm on Thursday 14th March, 1969, a white male of age 20-25 was observed to appear in mid air approximately 30 feet above the ground of a field near ███████████, Pennsylvania USA. The male was observed by a Mister Dan McBriar, into whose hay cart he is reported to have landed. Mister McBriar reported the occurrence to local law enforcement, but the unknown male could not be located when apprehension was attempted.

The unknown male remains at large and has been designated Person Of Interest 0001192.