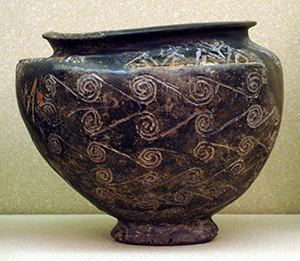 SCP-660 may be safely stored in a standard locked safe-deposit box, provided its mouth remains covered with an inert Perspex disc and sealed with affixed tamper-proof strips. SCP-660 may be checked out for testing and research with the written approval of staff of Level 3 clearance or higher.

Human testing of SCP-660 is discontinued.

SCP-660 is capable of indefinitely preserving all biological tissue placed within it, regardless of external conditions or the state of the sample, until the tissues are removed. Living tissue will remain viable, and living organisms will remain alive, even when deprived of sustenance for extended periods of time. While the exact mechanism responsible for this is uncertain, isotopic labeling has shown that it involves the exchange of biological matter between the sample and SCP-660's interior coating.

SCP-660-1 was a human fetus originally found in SCP-660, most likely having been sealed in the artifact for at least 6,600 years. However, SCP-660-1 immediately underwent massive transformation upon removal, additionally developing several █████-████ █████████ consistent with Anthropogenic ██████-Progression. SCP-660-1 is most likely neutralized. Details are available to personnel with Clearance 4/660.

Recovery: SCP-660 was originally recovered from an archaeological dig in ████████, ██████, where it was found in a purported gravesite among a number of other mundane artifacts. A beeswax seal covering the mouth of SCP-660 was dislodged during the excavation process, revealing SCP-660-1. [DATA EXPUNGED], after which the site was secured by the Foundation. The notes of Dr. ████████ (presumed deceased) enabled the isolation of SCP-660 from the rest of the artifacts.

Lab Report 660-A
Sample Condition: Skin flap harvested from the left thigh of the cadaver of D-612. Donor was healthy in all respects prior to death.
Sample Use: Tissue sample left in SCP-660 for two months' duration.
Result: Daily biopsies indicate viability of sample. Cell samples taken from tissue graft are cultured in vitro, revealing a predisposition towards precancerous and cancerous growth.

Lab Report 660-B
Sample Condition: Skin flap harvested from the left thigh of the cadaver of D-612.
Sample Use: Tissue sample left in SCP-660 for two months' duration, then grafted onto the torso of a D-class personnel with second and third-degree burns. The recipient's anomaly testing record had no contraindications with SCP-660.
Result: Tissue graft takes without complication, healing according to usual steps of adherence, serum inhibition and revascularization. However, as is common with severe burns cases, the compromised skin barrier led to infection, and eventual fatal septic shock. Post-mortem biopsy and analysis indicates skin graft would have returned to full histological structure and function had the recipient survived.

Lab Report 660-C
Sample Condition: Live member of Mus musculus (house mouse), BALB/c strain, acquired for laboratory testing. By use of SCP-████, the consciousness of D-614 was implanted into the specimen. D-614 was chosen for his demonstrated resistance to the negative effects of prolonged isolation and sensory deprivation.
Sample Use: Specimen left in SCP-660 for two months duration.
Result: Unusually, SCP-████ was incapable of restoring D-614's consciousness to its original body after removal from SCP-660. A computer interface was developed to facilitate two-way communication with D-614. An interview was conducted once D-614 was familiarized with this interface; an excerpt is included below.

Dr. Brown: I guess I'll have to take your word for it. And how did that feel?

Dr. Brown: Could you be more specific?

D-614: How the hell do you think it felt? Even mice need to grow and move and LIVE. Every part of me was straining, but I was stuck. I thought I would explode.

Full contents of the interview are classified. An autopsy revealed precancerous growths throughout the mouse's body.

Addendum: Human testing with SCP-660 is suspended due to the sudden death of D-778 from teratoma with malignant transformation. I've seen fetus in fetu before, but never have I had one try to grab my probe during an autopsy. - Dr. Grayson