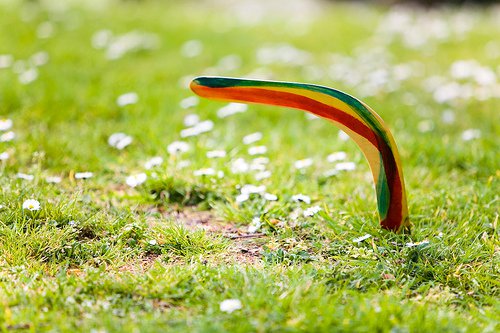 SCP-653 is to be kept in a securely locked box in Storage Room B at Site-██. The keys to the box are to be in the possession of Researcher ██████. Removal of SCP-653 requires at least two armed guards.

If skin contact is made with SCP-653 outside of experimental conditions, the affected individual is to be separated from SCP-653 and taken in for testing. Test subjects are to be kept under sedation in order to prevent self-injury while attempting to re-acquire SCP-653. Due to many individuals having become obsessed with SCP-653 prior to containment (see Addendum), people may attempt to enter Site-██ in order to regain possession of SCP-653. These individuals are to be apprehended and brought into Site-██ for testing.

SCP-653 is a plastic, multi-coloured boomerang measuring 25 centimetres from tip to tip. SCP-653's shape is the typical returning boomerang; however, it is more durable than its makeup would indicate.

If a person makes skin contact with SCP-653, they will instantly become obsessed with it and will not allow it to leave their possession. After approximately 48 hours, they will develop a condition similar to magnetoception, becoming aware of SCP-653’s approximate position at all times; testing has shown that removing SCP-653 from the subject does not affect the rate at which the condition develops. Once the subject is aware of where SCP-653 is, they will be compelled to throw it as they would a typical boomerang. Instead of returning, however, SCP-653 will travel large distances away from the subject. Once SCP-653 has been thrown, the subject will immediately begin to seek it out; aided by their magnetoception, the subject will invariably be able to locate it. During the time that SCP-653 is being sought out by a subject, it is possible that another person will pick it up and become similarly obsessed with it; this has led to an unknown number of individuals actively seeking SCP-653.

SCP-653 came into the possession of The Foundation when Agent Gilson reported finding a boomerang stuck in the ground of Site-██. She took a photograph of it (pictured above) but did not turn the boomerang in. Two days later, Agent Gilson was reported missing from Site-██ and when contact was eventually established via her handheld transceiver, she refused to return to Site-██. Her reason for this was: “I’ve just gone out to get my boomerang back.” Agents S███████ and Ancor were dispatched to follow her as this boomerang could potentially be an SCP. Nine days later, Agent Gilson found the boomerang roughly 17 kilometres away from the town of [REDACTED], at which point Agents S███████ and Ancor were ordered to engage and retrieve the boomerang. Agent Gilson was killed and Agent Ancor accidentally made skin contact with it and became very possessive of it, threatening Agent S███████ to stay away. Agent S███████ was then ordered to retrieve the boomerang and was forced to eliminate Agent Ancor to recover it. The boomerang was then safely brought back to Site-██ so its properties could be established.

Addendum-653-1 At 11/4/████, 9:43pm, an individual was apprehended attempting to gain entry into Site-██. The individual reacted very aggressively when being stopped; he has been taken in for study to see the extent of SCP-653's long-term effects. At the time of writing (06/9/████), seven other individuals of varying age and ethnicity have been apprehended attempting to enter Site-██ and gain hold of SCP-653.