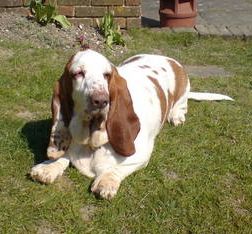 SCP-652's vocalizations are to be recorded and preserved for analysis; special note is to be taken of any mentions of the phrases "ash cloud", "hurricane", and/or "radiation".

SCP-652's behavioural anomaly is its ability to produce human speech instead of barking or other standard canine vocalizations. Subject constantly 'gibbers' phrases in at least thirty-four (34) human languages; although five (5) of the languages have not been identified yet, analysis of the other twenty-nine (29) languages (see document 652-G for list of identified languages) indicates that SCP-652 is constantly making meteorological predictions for various locations worldwide. These predictions have been found to be 100% accurate for those locations which have been able to be identified.

The predictions have no obvious connection with any external stimuli; while it can be assumed that SCP-652 is aware of its own behaviour, it does not appear to be under the subject's control. Quality and clarity of vocalization is dependent on SCP-652's physical condition: speech is muted and 'mumbled' while the subject is sleeping, garbled while the subject is eating or drinking, and agitated and staccato when the subject is excited or afraid. Subject's 'voice' is low in pitch, and has a rather limited vocal range; staff consistently refer to it as 'unsettling'.

While SCP-652's unusual larynx is the most obvious link to the subject's constant vocal activity, a basic knowledge of speech production tells us that simply changing an animal's larynx will not necessarily allow it to make sounds similar to human speech; indeed, comparative biology reveals that human and canid larynx structures are actually quite similar. SCP-652's larynx, on the other hand, appears to have no correlation to either.

History: SCP-652 was recovered during a raid on a Marshall, Carter and Dark office in █████████████. It was found in a shipping crate bearing the indications of having been recently delivered by the [REDACTED] national postal service, with an invalid return address. At the time of the raid, a Marshall, Carter and Dark operative was in the process of composing a letter regarding SCP-652; the operative died while resisting capture and the letter (Document 652-N41) was retrieved from her typewriter.

I regret that you were unsatisfied with your purchase; however, it is scarcely our fault that you misinterpreted the catalogue description of the item.

That said, I must remind you once again that all sales are final. We provide our clients with unique and unparalleled experiences; we do not provide refunds, regardless of whether or not you return your purchase. One would hope that you would have learned this by now.

Because we value your business, and because we regret the unfortunate incident subsequent to your last year's purchase of [DATA EXPUNGED], I have been authorized to repurchase the item from you. We will pay you [REDACTED] in cash, or offer you twice that amount as credit on your next purchase. Although this is less than 10% of your original purchase price, the [end of document]