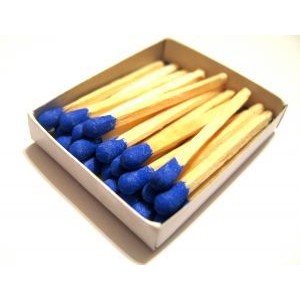 Documentation of SCP-649, prior to initial containment.

SCP-649 is a Diamond brand matchbox, containing standard thirty two (32) match count. It has a mark on the underside of the box, resembling a snowflake. Whenever SCP-649 is left open for more than fifteen (15) minutes, or one of its matches is struck1, its anomalous properties will manifest. The area SCP-649 is held in will experience a sudden decrease in temperature, followed by strong winds. These winds will still develop if the item is indoors.

When the temperature in the area SCP-649 inhabits reaches 0 degrees Celsius, SCP-649 will begin to exude large amounts of snow and sleet in a manner similar to SCP-2082. In addition, SCP-649's area of effect will rapidly increase, to a radius of 1km. The sleet and snow will be continuously produced by SCP-649 until the entire radius is covered by snowfall at least three (3) meters deep with a temperature below -30 degrees Celsius.

SCP-649's area of effect will expand at a rate of fifteen (15) meters an hour, continuously. In addition, tundra-like conditions will develop near the epicenter of SCP-649's effect, expanding at the same rate. The temperature within SCP-649's radius will stay at a constant -45 degrees Celsius. This effect will continue indefinitely, with the only known means of halting the expansion of the area of effect being to close SCP-649's lid.

SCP-649 was recovered on 06/19/1987, from ███████████, WV. Reports had reached Foundation operatives indicating that the town was experiencing blizzard conditions, which prompted investigation. SCP-649 was found in the center of the town, within a cemetery. Agents were able to contain SCP-649 on 04/16/1987, classifying it as Euclid. Amnesiacs were dispersed to local citizens, and a cover story blaming the incident on global warming disseminated.

Addendum 649-A SCP-649 was left open for approximately one hour and forty-eight minutes (1:48:00). After one hour and forty five minutes (1:45:00), children's laughing could be heard, and a snowball hit Dr. Pena. Silhouettes of small forms could be seen through the fugue. Three (3) D-Class personnel were sent to investigate. When they did not return after an additional twenty (20) minutes, SCP-649 was closed and containment protocol initiated. The D-Class personnel have not been recovered. When the tape was replayed, one of the D-Class could be seen led by small figures through the walls of the test chamber. Records on the missing personnel indicate all three (one (1) male, two (2) female) had had children who had died before adolescence. All testing with such personnel has been suspended.

Footnotes
1. Note that striking a match does not light it, or appear to alter it in any way
SCP-648 SCP-650