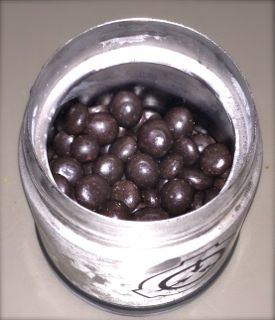 SCP-643, temporarily moved from cold storage. Temperature in the room is 7° Celsius.

SCP-643 is to be contained in a cold storage cell located at Site-77's Safe SCP wing. The ambient temperature of the room that SCP-643 is contained in must never exceed 10° Celsius. Any circumstance resulting in the temperature rising above this threshold is to be treated as a potential containment breach. Personnel handling SCP-643, or performing testing in its liquid state, are required to wear a hazmat suit equipped with a self-contained breathing apparatus.

SCP-643 was recovered from a freezer located inside a bakery in Jacksonville, FL, where police had arrested 3 employees for cannibalizing their co-workers and several of the bakery's patrons. Agents embedded in the local police department noted that SCP-643 had caused the incident, and recovered 79 instances of SCP-643 from the bakery. Witnesses were administered Class-C amnestics, and SCP-643 was classified as Safe on ██/██/1978.

Addendum: Excerpt from Interview 643-A

Dr. B███: … and why did you feel compelled to attack her?

D-4312: I couldn't help myself, man… she smelled so good, it reminded me of stuff my mom used to make.

Dr. B███: You didn't think it was wrong to eat another human?

D-4312: I would've, but it felt… different. Like, it was okay to eat just a little, because it smelled so good. I just wanted a taste.

Dr. B███: If you "just wanted a taste", why did you continue eating D-1122 after she expired?