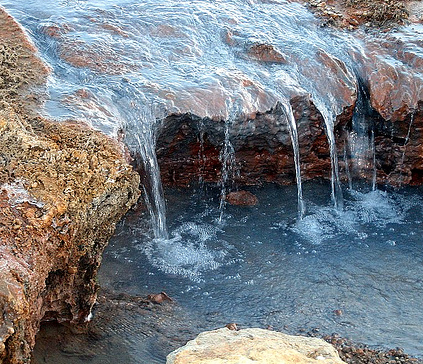 Both SCP-642-1 and SCP-642-2 have been fenced off and designated as sites of high radioactivity not currently suitable for remediation. Monitoring by Foundation personnel to prevent civilian access is ongoing.

Under no circumstances are human males with functioning testicular tissue to come into contact with SCP-642-1 or samples taken from SCP-642-1. Females with functional ovarian tissue should observe strict Foundation pregnancy prevention protocols while monitoring or working with SCP-642-1, as well as refraining from ingestion of or immersion in the SCP's waters. It is recommended that intact males of any mammalian species not involved in Foundation experimental procedures be kept three (3) meters away from SCP-642-1 at all times, as should Foundation personnel with known thermal sensitivity issues.

SCP-642-2 poses no hazard to male personnel beyond ambient temperatures, but pregnant female personnel who intend to remain pregnant must remain three (3) meters away from SCP-642-2's borders for the duration of their pregnancies. 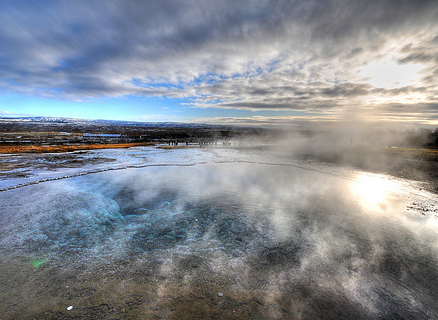 SCP-642-1 and SCP-642-2 are a pair of geothermal hot springs located in the ███████-██████████████ region of northern Iceland, approximately six kilometers apart. Characterized by extremely high flow rate (160 liters/second at SCP-642-1, 165 liters/second at SCP-642-2), water emerges at both sites at temperatures varying between 45 and 57 °C depending on the time of year. The sites are geographically remote and inconveniently situated relative to the majority of the island's population centers. They came to Foundation attention in 20██ during the ██████ mass genomic decoding project. Foundation agents were dispatched to the ████████████████ valley to investigate anomalous data and the ██████ study results were first doctored, then sealed.

As of 20██ there had not been a male birth in ██████████████ in over four hundred years. The residents of ██████████████ instead made use of SCP-642-1's unique properties. Immersion of a sexually mature female mammal in SCP-642-1's waters induces thelytokous reproduction- that is to say, fusion of two unfertilized mature ova or polar bodies present in pre-ovulatory follicles to produce a diploid zygote genetically identical to its lone parent. The chemical and biological properties of SCP-642-1 result in rapid early development of the zygote, usually at a rate two to four times faster than normal for the species.

Agent ███████'s accidental immersion in SCP-642-1 revealed that SCP-642-1's properties are not sex-linked and will in fact induce fusion of any mature gametes in the body and subsequent rapid zygotic development regardless of cytoplasmic composition of the cells in question. In humans mature ova are mostly produced one at a time, but mature male gametes – sperm cells – number in the millions at any given time. As Agent ███████ initially discounted the inflammation as being due to SCP-642-1's elevated temperatures, no medical measures were taken. By the time his situation was recognized, tissue damage had [DATA EXPUNGED]. Agent ███████'s autopsy was conducted under BSL-3 protocols in Sector 7 medical lab, with the extracted [DATA EXPUNGED]; the results are available to level 4 security clearance personnel as document #CH-2462.

Further discussion with ██████████████ residents after Agent ███████'s death led to the discovery of SCP-642-2 six kilometers away. Considerably different in chemical composition and inhabited by several previously unknown thermophilic microbial species, SCP-642-2 was cited as a sort of counter-agent to SCP-642-1. Immersion in SCP-642-2 is generally easier, as its temperatures are on average five to ten degrees C lower than those of SCP-642-1. Within five minutes of immersion, all cellular development and division of blastocystic cells- the outer layer of a developing zygote that has not yet implanted- ceases and the cells begin to disintegrate, resulting in the death and expulsion of the unimplanted embryo. Examination of animal corpses in the vicinity of SCP-642-2 indicates that the process applies to more fully developed pregnancies as well, causing the death and destruction of placental tissue, followed by immediate expulsion of all remaining products of conception.

Testing performed with mice indicates that immersion effects of both SCP-642-1 and SCP-642-2 are still present up to 24 hours after the water has been removed from the original source. Experiments with mixed waters results in no discernible effect either way at relatively even concentrations; testing continues on mixtures of 80% or greater from primary source. Oral consumption of water from either SCP produces results similar to immersion.