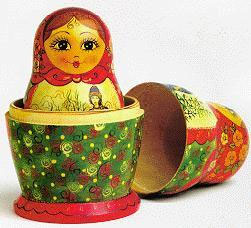 The doll after approximately 45 minutes of disassembling.

When not in use by researchers or containment teams, the doll is to be stored under lock and key in an on-site safety deposit box. The box should be lined with felt and filled with packing materials in order to ensure its safety.

SCP-641 is a seemingly ordinary set of Russian matryoshka dolls, but each layer is improbably thin. 1,347 layers of the doll were measured and demonstrated a mean thickness of .04 micrometers with a standard deviation of .02 micrometers. If the disassembled dolls are left untouched for a length of time (ranging from five to seven minutes) the dolls will animate and begin to reassemble- the largest doll 'leaping' over the next largest until the doll is assembled at an extremely rapid rate. The longest time this phenomenon has been observed is three minutes and forty-six seconds, the doll reassembling itself from 3,228 separate pieces. Subjects disassembling the dolls show a marked aversion to leaving the dolls alone, and if compelled to do so will become angry, physically fighting any restraints until the dolls begin to reassemble, at which point attempts to reach the doll cease and the subject typically turns on those responsible for restraints, shouting obscenities until tranquilized. Subjects utilizing the doll show a single-minded interest in disassembly, and will not be distracted without an interruption of significant magnitude, threatening the subject's safety or health. Afterwards, the subjects recall disassembling SCP-641, but exhibit nothing more than mild annoyance at most.

Document 641-1 This document is the transcript of Dr. Frederick Heiden's comments, upon utilization of the object.

Dr. Heiden: Experiment 641-1. I will attempt to disassemble SCP-641 and record at five-minute intervals. Guards are posted at the doors and I am unarmed, in case I become unmanageable.

Dr. Heiden: Five minutes, three seconds. I have removed thirty-two layers. I am proceeding slowly specifically despite my urge to move rapidly.

Dr. Heiden: Nine minutes, fifty-nine seconds. Sixty-eight layers removed. The urge is growing stronger… I really want to see what's in the middle of this thing.

Dr. Heiden: Sixteen minutes, twenty-three seconds. Four hundred eighty-three layers removed. This is more fun than I gave it credit for at first. Wasn't paying attention to the stopwatch, I'll correct that for the next report at twenty minutes.

Guard: Doctor Heiden, don't you need to make a rep-

Dr. Heiden: Shut up. Wait, shit. Uh… forty-five minutes, twenty-three seconds. Oh, man. Terminating experiment, I may be compromised by SCP-641. *sounds of a chair scuffling* Stevens, replace the object in its holding container, I'm going to Psych for an evaluation.

(sounds of a chair scuffing the floor, then footsteps)

Note: Dr. Heiden has demonstrated an aversion to contact with SCP-641 after the incident documented, and his psychological profile demonstrated no dangerous tendencies. After a month, he was placed back on duty as head of research for SCP-641.

Addendum: The object is under no circumstances to be used for personal amusement or recreation. Any personnel seen improperly utilizing SCP-641 will be reprimanded and a note placed on their personnel file pending transfer to another project. Any experiments with the object are to be performed with D-class personnel whose medical history shows no alcohol or narcotics abuse, and whose psychological profile shows no predilection to addiction. If the object needs to be neutralized to prevent capture, current research indicates that a hammer, or tightly closed fist will do.

Notes: This object shows potential in pacification of dangerous humanoid SCPs, research into how the effect is achieved will continue. Any field teams requesting access to SCP-641 may submit a request directly to me. Please include a description of who will be accessing the device, and notations of their trustworthiness - if it is broken, you will have me to answer to. - Dr. Frederick Heiden