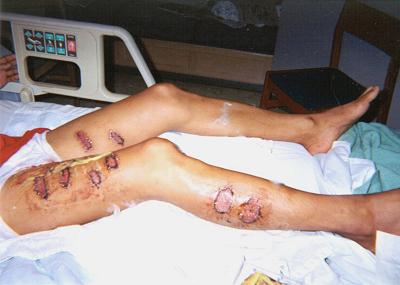 SCP-640 is to be kept inside an ellipsoidal room with a uniformly-reflective interior, such as nickel or chromium plating. The atmosphere in the room must be maintained at a temperature of between 260 and 307 K, at a relative humidity of 50% or less. Temperatures and humidities outside these limits greatly increase the entity's appetite and aggression and will likely result in personnel casualties.

The confinement chamber must be equipped with a light-tight airlock fitting equipped with an electronic interlock to prevent both doors from being simultaneously opened. Though SCP-640 is not known to be able to assume a gaseous form, these doors should be airtight and, if possible, watertight to facilitate emergency containment measures.

All personnel entering the containment facility must wear reflective suits including anti-IR face shields. Exposure time shall be limited to no more than 30 minutes without O5-level consent. All personnel shall receive a dose of amphetamine, modafinil, or caffeine prior to exposure; resistance, intolerance, or allergy to these drugs is an absolute contraindication to assignment to the SCP-640 study team.

SCP-640 is a free-roaming sentient electromagnetic phenomenon, typically manifesting as several roughly circular spots of yellow-orange light, between 18 and 57 mm in diameter depending on the entity's current appetite and energy level. It has also been observed to manifest as spots of infrared and EHF radiation, and seems capable of rapidly varying its wavelength.

In all known instances, SCP-640 has disguised itself as spots of sunlight shining on a wall, typically inside a child's room. It generally fades from view (presumably by shifting into the IR or RF range) when closely investigated.

SCP-640 is carnivorous. While it is capable of deriving sustenance from all known Earth animals, SCP-640 shows a marked preference for humans and apes, especially children. It consumes its prey by inflicting burns of varying severity and depth. For as yet unknown reasons, SCP-640 tends to target the face, legs, and forearms of its prey. It also often feeds on the same prey repeatedly, allowing it time to heal between attacks. The entity prefers to attack sleeping prey, though if angry, hungry, or frightened, it will not hesitate to attack prey while awake. When it wishes, it can inflict fatal burn injuries to an adult human in approximately 120 seconds.

As multiple specimens of SCP-640 have surfaced, an effective means of neutralization is being sought. The Foundation does not currently believe it necessary to contain more than a few specimens in light of the resources required.

Recovery Notes: The first SCP-640 specimen was recovered from the home of ████████ █████████ in ████████, Japan, in 1984, after both his children were admitted to a local hospital with severe burn injuries. The Foundation was alerted by an anonymous source believed to be working for [REDACTED]. Foundation agents discovered the entity after several weeks of probing, during which time one of the children was killed by the entity. Agents managed to capture it using [DATA EXPUNGED] and transported it to Site 17 for containment.

A second specimen was recovered in ████████, ████████, United States, in 1999, and another in 2006, both in the same neighborhood.

Addendum 640-a Reports from Australia suggest there is at least one SCP-640 specimen in the wild somewhere in ████████ and likely another in █████████. Agents are currently attempting to locate and contain the entities.

Addendum 640-b In two separate incidents, SCP-640 has been observed to distract researchers, causing them to have accidents resulting in breach of suit integrity. Following suit breach, both researchers were fatally attacked by SCP-640. Research team lead has recommended that SCP-640 be provisionally assigned Keter classification pending further investigation to determine whether the entity's actions were deliberate or fortuitous.