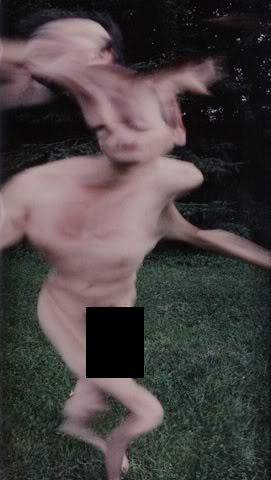 SCP-639 is to be kept in a standard containment cell measuring 3 m x 3 m furnished with whatever the subject requires so long as the items do not threaten security. SCP-639 should not leave containment area without an escort of at least one security guard, and should not be allowed to mingle with site personnel.

SCP-639 is a Caucasian male approximately 1.6 m in height and weighing 78 kg, age 24. SCP-639 is viewed simultaneously on all angles regardless of viewer's position: being in front of the figure will have a view of his front, back, sides, and so forth. Attempts to capture the subject in any sort of photographic medium yields a heavily distorted figure (as shown in the attached image).

Exposure to SCP-639 causes extreme eyestrain and mild paranoia, with subjects reporting "not knowing if he was coming or going, or what he was even looking at." Effects do not persist once SCP-639 is removed. It should be noted that SCP-639 observes the whole of the world in the same fashion that it observes him (that is, all objects are apparently seen from all angles at once), which seems to have caused extreme paranoia as well as a host of associated mental illnesses.

SCP-639 was recovered in ██████, Texas, from the █████████ County Mental Hospital. Subject was under the care of Dr. ████ █████, who alerted the Foundation May 12, 20██. SCP-639 was picked up by Agents ██████ and ███, under the guise of a medical transfer. Class C amnestics were administered to staff. SCP-639 was transferred to Site-██ where he is currently being kept.

Foreword: Initial Interview with SCP-639. Doctor ██████████ interacted with SCP-639 via use of an external speaker system to reduce visual stress.

SCP-639: (Fifteen second pause) Where are you not above not below front or behind neither to the left nor the right but straight along the path of righteousness where are you where where where-

Dr. ██████████: What do you-

SCP-639: I see all all the world the things that which is there all sides all that is and was and will be there I see you not know you not therefore you are not are you not another voice a new voice to hear with mortal ears and no godly eyes-

Dr. ██████████: 639, which direction are you currently facing?

SCP-639: (Laughing, points. Due to effect, this is less than helpful.)

Dr. ██████████: You are facing every direction simultaneously?

SCP-639: I see all that is and was and will be from all sides and angles and points and-

Final Notes: Definite signs of serious mental illness. Thinks that the interviewer is not real unless physically present to be seen, but as that causes serious visual and mental stress to the interviewer, I do not recommend it.

Foreword: Initial interview to establish the effect of SCP-639 on D Class Personnel.

Dr. ██████████: If you would, please describe your encounter with the subject.

D-639-9: You mean that, that, I don't even know what to call that, doc. ████, man, that thing was like… It was like you know when you're in a fun house? And they got all the mirrors around you?

D-639-9: It was like someone took all the reflections from all the different mirrors and stacked them one on top of the other but… I don't know. I don't know how to-

D-639-9: Alright. (Swallows nervously) Could I get some Aspirin or something? Gave me a killer headache.

D-639-9: ████, fine, whatever. Like if you stacked all the reflections, but you could see them all by themselves, like one by one, but you saw them all at the same time? That's the best I can do, doc.

Dr. ██████████: I see. Was there anything else? Any sort of… emotional response you felt? Sudden compulsions? Anything like that?

D-639-9: Uh, well, I guess so. I mean, he was looking at me, right? But he wasn't looking at me, because he was facing the other way, but both ways at once- I just felt paranoid as ████, doc. I didn't know if he was coming or going, I didn't even know if he noticed me, or what he was looking at. And he hurt to see. Gave me a headache right? Please could I get a glass of water or something?

Dr. ██████████: Certainly. I have everything I need. The guard will see you back to your cell.

Closing Statement: [D-639-9 kept in solitary confinement to determine whether SCP-639 caused any sort of memetic or mental effect. None surfaced over the course of the quarantine and the subject was terminated on schedule.]