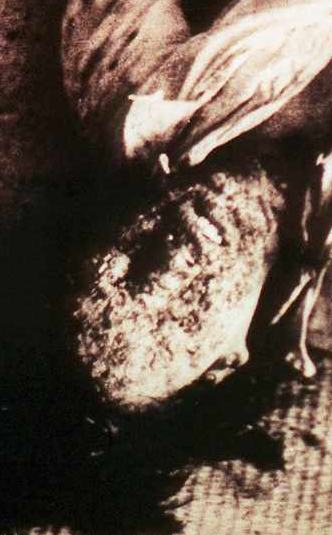 SCP-638 is to remain in lock-down at Site-33 at all times. Female personnel are not to interact with SCP-638 in any way nor come within thirty (30) meters of SCP-638's containment cell. SCP-638's cell is ten (10) meters by fifteen (15) meters. Ongoing attempts at operant conditioning of SCP-638 incorporates rewards and punishments through room furnishings. SCP-638 has responded well to this conditioning, despite an incident during which it seems SCP-638 discerned the nature of the conditioning and became enraged. Any of these items may be removed as a result of misbehavior by SCP-638. SCP-638's containment cell currently contains:

SCP-638 has special dietary concerns. SCP-638 seems unwilling or unable to ingest any cooked food. Testing determined that raw meat, from any mammal, will sustain SCP-638. SCP-638 also demands wine constantly, though it is restricted as a special reward.

SCP-638 appears to be a male human of slim build, hairless and extensively scarred. SCP-638 is covered almost completely in burn scars resulting from [DATA EXPUNGED]. While SCP-638 has been shown to heal at an abnormal rate, directly proportional to SCP-638's consumption of raw flesh and wine, the scar tissue remains and hair has not regrown. SCP-638 seems to understand English and is responsive to commands, but is either unable or unwilling to reply. SCP-638 has issued demands, but these come in the form of one or two word shouts in the Boetian sub-dialect of Aeolic Ancient Greek. To date, SCP-638 has demanded wine, ivy, olive trees, grass for the floor, freedom, women, live animals, a drum, a flute, and a view of the sky. Initially SCP-638 became violent upon not being appeased, demonstrating great strength and speed in short bursts. SCP-638 is responsible for the deaths of several security personnel and staff members, including Dr. ██████████. When completely enraged, SCP-638 has been able to dent steel with blows, easily lift and throw a grown man, and break restraints. When enraged, SCP-638 has also demonstrated the ability to shout with great volume and force, shattering glass and deafening personnel. These shouts vary in intensity, with the strongest having blown a steel door off of its hinges. Audio analysis of SCP-638's voice and shouts has revealed similarities in resonance to the calls of several animals, including male lions and bears, as well as certain bird calls. These outbursts invariably lead to periods of lethargy if the subject's hunger and thirst are not satisfied, so starvation has been used effectively as a behavioral control when coercion fails.

SCP-638 has demonstrated a strong psychic or empathic influence over women within an estimated radius of twenty (20) meters. Any females entering within this range will be compelled to be in SCP-638's presence, and once there will lose all inhibition. This manifests differently in each subject, depending on their personality and history. One commonality is their tendency to dance and jump and shout in a wild fashion. If allowed to persist, the subjects will dance until they drop from exhaustion and are physically unable to continue. Attempts to remove female subjects from SCP-638's presence result in violent responses from both SCP-638 and all affected subjects. Once successfully removed from the range of the effect, subjects demonstrate full memory of their actions, and if they did something they would otherwise not have done, as is often the case, they feel intensely ashamed and will not willingly approach SCP-638 again. SCP-638 has on several occasions used the affected subjects in order to attempt escape. Affected subjects demonstrate greater than normal physical strength and agility, and post-mortem examination revealed elevated levels of adrenaline as well as an unknown chemical compound consisting of [DATA EXPUNGED]. SCP-638 seems to control the subjects' actions through some form of mental suggestion as there is no verbal communication. Research into the possibility of telepathy is ongoing.

SCP-638 was discovered in the smoldering remains of a mountain compound in [DATA EXPUNGED], barely alive. Though no other survivors were found, the remains of fifteen (15) (presumably) human females were uncovered in the ruins. Too little of the remains survived [DATA EXPUNGED] for a full autopsy, but skeletal remains showed no abnormalities. SCP-638 has given no indication that there were any others of its kind present at the compound, but this is not certain. Interrogation in conjunction with extreme nutrient deprivation revealed that others do exist, though they do not form communities apart from their groups of enthralled women. To date the subject has not revealed the location of any others, but interrogation is ongoing.