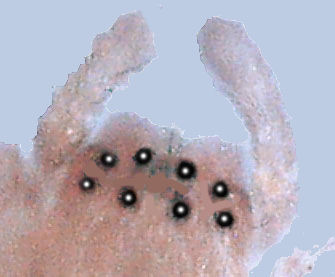 A live colony of SCP-632 is currently kept in a 20cm x 40cm x 20cm sealed enclosure in the Biological Containment Wing of Site-52. Sufficient amounts of prey insects and water must be administered weekly through a vacuum chute at the side of the enclosure. Both live and deceased samples of SCP-632 must be handled by personnel wearing full-body respiratory protective gear. Skin contact with SCP-632 instances is to be avoided at all times.

Personnel reporting headaches, sensations of spider silk on skin, and intrusive thoughts about spiders must submit to MRI scans to determine the presence of SCP-632 manifestation. Affected individuals are to be sedated and restrained before the onset of late-stage manifestation, and any newly-formed SCP-632 instances are to be surgically removed.

Uncontained instances of SCP-632 in the wild are to be destroyed on sight.

SCP-632 is a type of arachnid that reproduces via unconventional means. Mature instances measure 10-15mm in length and are highly social, living in colonies numbering up to 500 individuals. While the exoskeleton of SCP-632 instances is composed of a substance resembling calcified fat, the interior is almost entirely derived from differentiated human brain tissue. SCP-632 is unusual among arachnid species in that both male and female SCP-632 are physiologically similar; sexual organs of both appear to be merely vestigial, likely as a result of its reproductive methods.

SCP-632 reproduces by exposing a human host to an array of sensory triggers. Such triggers include the visual patterns on SCP-632's abdomen, the tactile sensation produced by SCP-632 crawling on human skin, and several as-yet-unidentified chemical compounds released by mature SCP-632 instances.

2 to 3 hours following exposure to all of SCP-632's sensory triggers, affected individuals will experience mild headaches, sensations of spider silk on their skin, and repeated intrusive thoughts about spiders. MRI scans at this stage of infection reveal the presence of hundreds of small filament-like structures measuring 2-3cm in length forming in the frontal cortex of infected individuals' brains. The mechanism of cellular differentiation is as yet unknown to Foundation researchers, but is presumed to be similar to [REDACTED] observed in victims of SCP-1204. The pressure exerted on cerebral blood vessels by these structures causes headaches in affected individuals, localised towards the front of the skull. Repeated tapping on the affected areas causes the filament-like structures to release large amounts of endorphins, effectively alleviating the pain caused by their swelling. Growth of such structures can be halted via timely administration of Class-B amnestics; however, while this method prevents total SCP-632 manifestation from occurring, it does not cause existing symptoms to abate.

As SCP-632 manifestation progresses, affected individuals will experience gradual thinning of the anterior brain lining and skull, as bone, muscle and fat tissue is gradually incorporated into the filament-like structures in the frontal cortex. 6 to 7 days following initial exposure, headaches experienced by affected individuals will increase sharply in intensity and duration. This is due to the filament-like structures having already developed fully into instances of juvenile SCP-632, which greatly exacerbate the pressure on the cerebral blood vessels via their movements. Affected individuals at this point tend to apply increasing amounts of force to their foreheads in order to release enough endorphins to reduce the pain to tolerable levels. Eventually, most affected individuals end up fracturing their own skulls through accidental application of excessive force, at which point 80 to 200 instances of SCP-632 will exit the brain from the weakened point in the forehead.

Complete SCP-632 manifestation is usually fatal. However, if promptly attended to by qualified medical personnel, 86% of hosts in the final stage of SCP-632 manifestation do manage to survive, albeit with a permanent decrease in motor function, reduced impulse control, and severe arachnophobia.