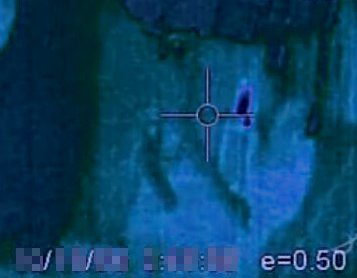 Thermal imaging scan of an SCP-630-1 from 12 meters away. Subject is rendered in black

SCP-630 is contained ██ m underground, in the remains of a copper mine, ██ km north of ████, Peru (██° ██' ██" S, ██° ██' ██" W). The chamber containing SCP-630 is to be as brightly lit as resources allow using LED and fluorescent lights and sealed behind blast doors. Weekly maintenance is to be performed by class D personnel only, including:

Since the ████ copper mine lies in one of the harshest desert environments on the planet and contains no other SCP entities, containment is as simple as restricting access to the mine and proper handling of persons affected. SCP-630 is estimated to move at a rate of 30 meters a year through an extensive system of caverns, and research is being conducted on its future path as well as mapping expeditions into the caves. As long as it remains contained, SCP-630's movement is not projected to pose a direct threat to populated areas.

Handling of any samples of SCP-630 or affected materials is to be done only with full reflective thermal gear. Any person exposed to direct skin contact with SCP-630 is to be considered dangerous and is classified as SCP-630-1. Exposed subjects are to be quarantined until arrangements can be made for their disposal. Samples of SCP-630 and remains of SCP-630-1 subjects are to be disposed of by ignition from a distance with a mixture of aluminum and sodium hydroxide.

SCP-630 is a 130 meter wide underground glacier and, according to surface sonar scans, at least 12 km long, moving at an estimated 30 meters a year. It is composed of what is theorized to be a mixture of water-ice, which is an opaque black and does not reflect any form of visible light or electromagnetic radiation. The leading edge of the glacier is fragile enough to take samples from; however, they have been shown to withstand ambient temperatures of over 1500°C without melting. Temperature probes indicate that the glacier is cooled to about -10°C, and any significant melting can only be achieved by a sustained exothermic reaction with the water molecules within the ice. When melted, SCP-630 reverts to ordinary, slightly impure water and displays a normal reflection/absorption spectrum. Any sources of water exposed to SCP-630 crystallize, forming ice which behaves for all intents and purposes as part of the original glacier. When samples are placed in contact with naturally occurring ice, no change is recorded in either sample. Research is ongoing into an emergency cryogenic containment protocol in the event that any SCP-630 affected materials are ever introduced to an unsecured body of water.

Personnel working around SCP-630 report frequent auditory hallucinations, most often the sound of someone pleading or calling for help from within the ice. Staff have reported that over a period of time these hallucinations can create a difficult to resist impulse to make physical contact with SCP-630. Recording equipment has yet to pick up any unexplained noises, but has detected low frequency sounds consistent with glacial movement. Acquisition reports also indicate that miners originally broke through a rock wall into the cavern thinking that they were following the cries of others trapped by a cave-in.

When direct skin contact is made with SCP-630, the body ceases to reflect any incoming light, causing it to turn pitch black and rendered blind, deaf, and mute. Extensive testing indicates that SCP-630 affects only warm-blooded animals: birds and mammals. Reptiles, amphibians, invertebrates, and fish remain unaffected aside from going into hypothermic shock. Once exposed, these specimens are classified as SCP-630-1. Affected subjects do not respond to any visual or auditory stimuli, instead feeling out their surroundings through touch and vibration, and will often follow walls and hide in corners.

Analysis of SCP-630-1 indicates that internal temperature decreases as much as 5°C/hour and subjects will instinctively attempt to make contact with heat sources, including fire, electronic equipment, incandescent lighting, and any nearby humans. En masse they have been reported to mob handlers as they attempt to find warmth, resulting in several severe cases of hypothermia. Attempts to communicate with SCP-630-1 have met with failure, since subjects are rendered too single-minded in their search for heat to respond. While they may be hard to see, SCP-630-1 are vulnerable to physical injury and are easy enough to dispatch. However, care must be taken in disposing of the remains as any fluids escaping from the body quickly solidify and can affect unprotected personnel.

Over the course of exposure, SCP-630-1 will begin to show lessened speed and motor skills and eventually find a corner or enclosed space, curl into a fetal position, and finally cease movement altogether. The temperature around SCP-630-1 continues to lower until it reaches -10°C, at which point any ambient humidity, combined with the body's natural water content, finally freezes into a layer of ice over the subject. After reaching this final phase, any skin contact creates the same effects as SCP-630. In addition, attempts to melt the ice have yet to reveal any traces of organic remains.

-I never thought I'd be so glad that they found this thing in such a godforsaken place. While it seems unlikely that enough of this crap will ever get into a large enough body of water to cause any sort of XK event within our lifetime, it looks like it'll be moving into the aquifers of the Amazon Basin within the next ███ years. - Dr. ██████