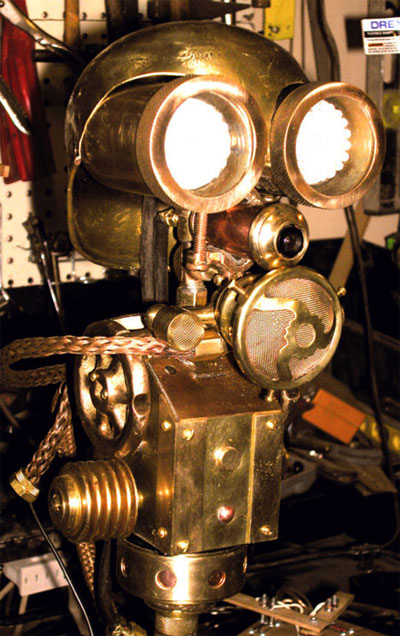 A portion of SCP-629's body, removed for study.

SCP-629 is a humanoid automaton, 1.7 meters tall and weighing 500 kilograms. SCP-629's body has been constructed out of ornate brass replications of human body parts. SCP-629's components require daily maintenance, which only it can perform. The words "Mr. Brass, from Little Misters® by Dr. Wondertainment" have been embossed into SCP-629's back. This designation appears as "8" in Document SCP-909-a.

SCP-629's body has been constructed in such a way that every portion of it is removable and interchangeable. These parts can be removed without causing SCP-629 any damage, although it expresses minor discomfort when these parts are being removed. Additionally, the parts that have been removed from SCP-629 can be re-assembled into new areas. Testing has shown that the number of ways SCP-629 can be theoretically rearranged is approximately 73.4 billion different combinations. SCP-629 is capable of controlling these new constructions on its body, but expresses extreme discomfort from these areas of its body.

SCP-629 was recovered from a facility believed to have been controlled by the Church of the Broken God. SCP-629 was recovered in a raid on this Church property after reports of suspicious activity in the area were confirmed. It was located in the central antechamber as Church members attempted to integrate it into several other objects. It is believed that SCP-629 was being held at this facility due to Church members believing it was a portion of their 'god'. Interviews with SCP-629 have confirmed this. SCP-629 claimed that it at first allowed their beliefs to persist, as it believed that they would provide it with some level of safety. Church members located at this facility have been terminated as of ██/██/1995, and SCP-629 has been classified as Safe.

Foreword: This log was taken as part of SCP-629's initial acquisition.

Dr.█████: Can you tell us more about how the Church came to acquire you?

SCP-629: So I was walking around downtown ████, kind of a slummy city but a good place to hide if you're some kind of freak like me. There'd been some rumors about me going around town and I'd been thinking about getting the hell out of dodge, when one night this hooded dude walks up to me while I'm in my alley.

Dr.█████: What did he say?

SCP-629: He offered to take me to some kind of church thing where they could take care of me. At first I was pretty hesitant because, y'know, look at me. But the guy told me that was why they wanted me there. I figured it would probably be better than the whacko doctor or living on the streets, so I said yes.

Dr.█████: Where did this person take you to?

SCP-629: It was some church, the same one you guys picked me up from. They apparently thought I was some part of their god, so they just gave me anything I wanted. It was pretty nice. I had safety, food, a warm bed and plenty of amenities to keep me occupied. For awhile, it worked out just fine.

SCP-629: It just got… boring. Being surrounded by all these guys who constantly fawn and adore over you, and give you anything you want. I mean, saying it now I can see how it might sound nice, but in reality it was extremely dull. So I told them, I said "I think it's time for me to move on."

Dr.█████: You said previously that they had a negative reaction?

SCP-629: Yeah, they totally started to flip out. They basically locked me in my room, pushed food through the little slot, the whole shebang. I could hear them moving some big heavy stuff outside my room. Eventually they pulled me out and took me into the big altar they had at the center of the church.

Dr.█████: It was at this point that they attempted to integrate you into the other objects?

SCP-629: Yeah, it was kind of… well… awful, to be honest. They were just jamming everything they had to me, and it was hurting me a lot. I think that if you guys hadn't shown up when you did, they might've added more to me than I could handle. That would be… bad.

Dr.█████: I believe that will be all. Security, if you would-

Procedure: SCP-629's left arm was detached, and then re-attached to SCP-629's torso.

Results: SCP-629 showed mild disorientation and impairment to its motor skills. SCP-629 was still able to control the arm, albeit with reduced general aptitude.

Results: As in the previous test, SCP-629 showed mild disorientation and impairment to its motor skills. Additionally, SCP-629 showed significantly lower aptitude when the arm was affixed to SCP-629's torso.

Results: SCP-629 expressed severe discomfort from this area, and refused to cooperate with researchers attempting to interview it. Further action may be necessary to curb this previously unforeseen behavior from SCP-629.

Preface: This was an unauthorized test, performed by staff not normally assigned to work with SCP-629.

Procedure: The composition of SCP-629's body was significantly altered, with many body parts placed seemingly at random across the main body. Additionally, many internal portions of SCP-629's composition were moved to the outside, and vice-versa.

Results: SCP-629 reported extreme pain from the altered portions of its body. In addition, SCP-629 had difficulty forming coherent thoughts and communicating with researchers. Due to the drastic changes made to SCP-629's body, it took over 36 hours to move SCP-629's body into a form resembling how it had appeared prior to the experiment. Since this test was performed, SCP-629 has reported feelings of being "broken" and had displayed significantly decreased physical and mental faculties. Testing has been discontinued until further notice.

ADDENDUM 629-A: This note was found on SCP-629's person during initial containment.

Wow! You've just found yourself your very own Little Mister, a limited edition collection from Dr. Wondertainment! Take your Mr. Brass apart, and put it back together again! Make one wacky brass doohicky! It's yours to build and enjoy.

Find them all and become Mr. Collector!!