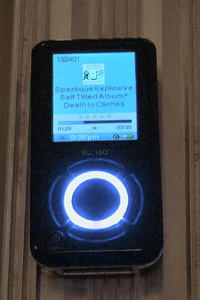 SCP-624 is to be stored in Site 16's safe storage room and charged frequently by testing personnel. Testing is open to all Site 16 personnel with proper clearance. Personal access to SCP-624 is otherwise restricted. SCP-624 is not to be taken off of Site 16 unless in the event of an emergency.

SCP-624 must be listened to through regular headphones before being played on regular speakers. SCP-624 is not to be played at Site 16’s social functions for entertainment due to containment protocol and possible risk of humiliation of Site 16 personnel.

Audio created by SCP-624 is not to be sold commercially, nor shared through filesharing networks.

Addendum 624-1: Personnel who do not listen to music, do not like music, or have zero musical influences are not allowed to test SCP-624. See Test Log 624-1.

SCP-624 is a Sandisk Sansa e200R Mp3 player and voice recorder. The back of the player says SCP-624 contains two (2) gigabytes of memory. Although the original owner’s manual claims there are pre-loaded sample songs, there are no files stored within its memory when played on normal speakers. Uploading music to SCP-624 seems to be impossible, as every program tested, including iTunes, Rhapsody, and Yahoo! Music, have all returned with encoding errors.

When powering up SCP-624 through headphones, a tone will play, and this tone will be picked up through SCP-624’s microphone. If SCP-624 does not detect the tone, it will shut down as if it were locked. If SCP-624 hears the tone from normal speakers, SCP-624 will power on normally, but contain no stored data. If SCP-624 detects the tone from a pair of headphones, SCP-624 automatically fills its library with two gigabytes worth of music. The music, in question, is all written, produced, played, and sung by the wearer of the headphones, regardless of current musical talent. Each song comes with an appropriate album cover and the listener’s artist profile, which is factually incorrect, possibly based on an alternate timeline if the listener had become a full-time musician.

When exposed to the musically inclined, SCP-624 will generate specific songs or improve songs they may have already written. When exposed to test subjects with little to no musical experience, SCP-624 will generate music based on their favorite music influences, regardless if they like the generated music or not. These songs tend to be very consistent to the listener, but more songs are added based on musical influences. If space runs out when the listener is introduced to a new musical influence, the listener’s least favorite songs are replaced. When shut down, the songs are subsequently deleted until SCP-624 is introduced to the listener once more.

Once powered up through headphones, the listener may unplug his or her headphones and connect SCP-624 to normal speakers. The audio files themselves cannot be transferred, but can be dubbed onto a separate recording device.

Subject: E-Class Personnel, E███ W█████. Subject's favorite genre is Adult Alternative and has experience in playing guitar.
Artist Profile: E███ W█████ is one of today's biggest names in acoustic pop and soul, sharing the same bill with such names as John Mayer and Jack Johnson. E███ W█████ began playing guitar at the age of eight and continued onto other instruments such as piano, trumpet, and drums. E███ W█████ also starred in Disney's High School Musical series, competing with Summerland star Zac Efron for the role of Troy.
Music Results: Music is very relaxed and modern-sounding. Lyrics mostly concern romance and recreational activities. Subject stated multiple songs were originally written by him, but were all of much higher quality, both in writing, performance, and recording quality. Subject was surprised and initially very happy, but later saddened by the test results.
Subject Comments: God, I wish I could sing like that.

Subject: Level 2 Security, Agent E█████. Subject does not normally listen to music, but would like to hear the results.
Artist Profile: D█████ E█████ UNKNOWN ARTIST 00000
Music Results: Music consisted of seventy-two (72) tracks, all labeled by number. Each track contains a condensed autobiography of the subject by year, narrated by the subject himself in a clear, theatrical voice. Personnel initially questioned the accuracy of the autobiography due to the inaccuracies of the previous tests, but track number ██████-████ (██) confirmed its accuracy when the narrator referred to this very test, stating that the subject will leave the room when they begin playing track seventy-two (72). The subject became distraught by the remaining biography as [DATA EXPUNGED] and subsequently left the testing room by track seventy-one (71). Two-thirds through the final track, the narrator begins to scream as [DATA EXPUNGED], presumably killing him. The sounds of [REDACTED] and inhuman cackling are heard for the remainder for the track.
Subject Comments: I never want to know what happens to me on that final track. I know I said you're going to tell me, but please, DON'T tell me.

Subject: E-Class Personnel, L██████ P████████. It should be of note that L██████ P████████, while aware of music, does not like or listen to music.
Artist Profile: L██████ P████████ does not think highly of herself. She thinks she is ugly and alone. She has frequent thoughts of suicide in between lusting after [NAMES REDACTED]. L██████ P████████ doesn't know why she gets up in the morning.
Music Results: The playlist did not consist of music, but a list of ███ names from Site 16 personnel. When played, the subject's voice would state her deepest opinions on the track's staff member. Despite protests from the subject, testing personnel played every track in order to find any discrepancies. Subject was visibly angry.
Subject Comments: Turn it off! I said turn it off!