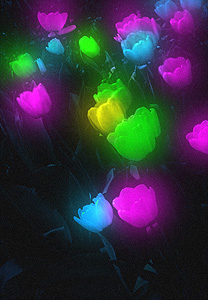 Various breeds of SCP-621 in the Site 16 greenhouse at night.

Addendum 621-3 Personnel are advised not to look at SCP-621 through sunglasses, which has recently been shown to increase SCP-621's mental effects. Only unfiltered lab goggles may be worn around SCP-621. It should be of additional note that unfiltered lab goggles, lab glass, or other transparent obstructions will not shield SCP-621's effects.

SCP-621 is a series of highly invasive flowering plants, originally released by ██████ & █████ Flower Shop, that have been in the Foundation's possession as of █/██/0█. These plants, mainly the plant species Didier’s tulips (Tulipa gesneriana), are naturally bioluminescent, powered by water and other nutrients. These plants glow a variety of colors, though most instances glow purple, blue, or green. This bioluminescent effect can be best seen at night or in a dark area. The effect is only active while the plants are alive.

SCP-621, particularly its glow, seems to have a hypnotizing effect on humans, with numerous requests by personnel to store them in their personal offices, all of which have been denied. SCP-621 has varying effects on other animals. When exposed to bees, hummingbirds, or cross-pollinating animals, all of the animals subjected have preferred spreading the pollen of SCP-621 as opposed to other flowering plants, and due to its bioluminescence, are capable of doing this at night, increasing its rate of reproduction. However, when exposed to herbivores, such as deer or rabbits, all of subjected animals have actively avoided SCP-621. With a high fertility rate, a natural defense against predators, and a hypnotizing effect on humans, SCP-621 can be deemed a highly effective invasive species.

Addendum 621-4 Upon further testing, SCP-621's pollen gives off a strong and pleasant aroma. SCP-621 is completely hypoallergenic, and when personnel with allergies are exposed to up to five (5.0) grams of SCP-621's pollen, personnel displayed no allergic reactions.

When placed around other plants, SCP-621 supersedes the nutrients provided to other plants in order to fuel its bioluminescence. As a result, SCP-621 quickly drains the soil of nutrients and requires more water than all other plants in the Site 16 greenhouse. Before being actively monitored by the Foundation, SCP-621 had uprooted multiple farming pastures, but because of its hypnotic qualities, nothing had been done to stop them. In addition, sympathizers actively watered the invading plants during their incursions.

Although government agencies such as the USDA and EPA protect against these sorts of invasive species, said agencies have actively defended SCP-621 at the expense of commercial farmers. It may be of note that these farmers have since accepted the situation, citing SCP-621's aesthetic superiority to their own crops and their desire to protect SCP-621. The Foundation stepped in when SCP-621 began invading ███████████ National Wildlife Preserve, threatening several instances of both endangered plants and animals. The EPA refused to hinder the spread of SCP-621, despite the existential risk to plants and animals, on the grounds that it would have made the ███████████ National Wildlife Preserve more aesthetically pleasing.

Although Didier’s tulips (Tulipa gesneriana) are the most common type of SCP-621, there also exist species of SCP-621 that include other types of tulips, roses (Rosa spp.), and a few instances of lettuce (Lactuca spp.) as a result of cross-pollination. However, no D-Class personnel could bring themselves to eat SCP-621, worried about possible side-effects. When force-fed, SCP-621 induces intense anxiety and paranoia on the subject, but no other side-effects. This anxiety dissipates upon digestion. This effect has been seen on multiple test subjects.

Addendum 621-1: In light of the recent events involving Dr. Z████████ hoarding several instances of SCP-621 in his personal office, all personnel on Site 16 are allowed to keep at least one instance of SCP-621 in their offices.

Note: To everyone asking me to ask the administration to release SCP-621 to the public: this is the very reason we're keeping SCP-621 here. I don't care if it looks cool or if I had a few in my office for a while. I know first-hand that this thing has some kind of hypnotizing effect on people, and something is telling me this plant has possibly evolved for that very purpose. If our own government agencies won't stop these things, we will. -Dr. Z████████