The Vessel and the Gate 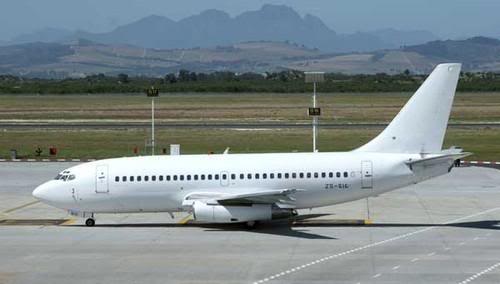 SCP-616 prior to Incident ██/██/███ when [REDACTED].

SCP-616 is to be kept in Site [REDACTED]. While grounded, repair personnel of a clearance level of two (2) or above are allowed to enter the craft, and must conduct thorough pre-flight inspections to ascertain that SCP-616 is ready for flight. However, repair personnel are to maintain a distance of at least three (3) meters from SCP-616-1. On flight days, only ordained and believing ministers of an Abrahamic faith with security clearance of level four or above may enter the aircraft, and must remain at least 0.94 m (3 ft 1 in) from the threshold of SCP-616-1 at all times whilst the craft is grounded.

SCP-616-1 should be kept from closing at all costs once activated. This necessitates a monthly manned flight. Failure to keep SCP-616-1 from closing will require initiation of Procedure 600-Shoki.

Each flight, seven (7) archbishops, ordained and believing in an Abrahamic faith, must surround SCP-616-1. Prayer directed at SCP-616-1 is to be sustained during the whole duration of the flight, usually three (3) to seven (7) hours. Prayer must be sustained by all able subjects, but once SCP-616-1 has activated, previously established distance restrictions no longer apply; subjects are in fact encouraged to try to physically stop SCP-616-1 from closing, though extreme caution must be taken to keep any personnel from falling through the threshold as that will likely result in [DATA EXPUNGED]. In addition, one (1) Foundation agent trained in flying commercial aircraft is to pilot SCP-616 through a pre-designed flight path, and must be able to maintain radio contact and information of events in SCP-616. Under no circumstances is the pilot cleared to approach SCP-616-1 once flight has begun. All personnel should be supplied with any religious paraphernalia they request before flight time. No extraneous personnel are to be present during flight for any reason, as they will likely be killed by SCP-616's activation, and provide corpses for reanimation or [DATA EXPUNGED].

The Roman-Catholic Pope (or a similar Abrahamic religious figure) must bless the aircraft in accordance with the appropriate religious ceremony once per full year. The official must report to the Foundation and arrive physically at the Containment Site at least three days prior to the year elapsing. Failure to do so may result in the door opening, resulting in [DATA EXPUNGED]. In the unlikely event that any official misses the ceremony, a substitute of equal rank must be on hand to replace him or her.

Furthermore, two ███ nuclear devices with a combined yield of ██ megatons are to be armed inside the aircraft at all times. In the event of an XK-Class End-of-the-World scenario, or if the door closes during flight, resulting in [DATA EXPUNGED], [DATA EXPUNGED], or transfers hostile beings in large numbers, these devices are to be detonated if Procedure 600-Shoki cannot be enacted.

Those with Clearance 4 of higher, please see [DOCUMENT SCP-616 CP3]

SCP-616 is a prototype Boeing ███-███, designed by █████ █████████ and constructed in 16/06/1966 to specifications. Though superficially similar to the Boeing 737 which went into service shortly afterwards, SCP-616's model had various internal alterations, including [DATA EXPUNGED]. Despite the various alterations, the most important feature of SCP-616 is the center left emergency door, which has been dubbed SCP-616-1. SCP-616-1 is a standard emergency door, though partially covered in extensive markings associated with Satanic cults adhering to [REDACTED]. SCP-616-1 can be opened without major incident when grounded, and leads to the outside of the aircraft as expected. However, this is discouraged as nearly all personnel opening and/or passing through the door have reported severe anxiety problems and a persistent feeling of being watched.

Long-term observation or exposure to SCP-616 is not recommended. Observation using any sort of electronic device is satisfactory while SCP-616 is grounded, though some visual anomalies have been recorded, including [DATA EXPUNGED]. As such, it is advised that personnel known to have a high tolerance to disturbing imagery be assigned to observation duty, and work no longer than three (3) consecutive days. All personnel involved in the repairs, observation, operation, or flight of SCP-616 must submit to psychological evaluations after each period of exposure.

SCP-616-1 will autonomously open once every thirty (30) days, and begin to close. This event can be considered the activation of SCP-616-1. The speed at which SCP-616-1 closes is highly dependent on SCP-616's altitude, velocity, and [DATA EXPUNGED]. It should be timed so that SCP-616-1 opens in mid-flight, at an altitude of approximately 10,972 m and a speed of about 780 km/h. Failure to properly time this event is catastrophic, since SCP-616-1 closing fully while grounded could affect all life-forms within an unknown radius, causing potentially hundreds of [DATA EXPUNGED], posing severe threats to population centers, and requiring immediate use of Procedure 600-Shoki. Please see [Document SCP-616 DE2] for further information on [DATA EXPUNGED] and effective means of termination.

Once SCP-616-1 spontaneously opens, cabin pressure will destabilize as expected, and extreme 'turbulence' is encountered. At various points during the flight, all present personnel may feel as if SCP-616 is quickly falling, though it has been ascertained that SCP-616 remains in relatively stable cruising conditions during all times, including during the times of these events. SCP-616-1's opening may cause certain individuals present to suffer fatal heart-attacks or [DATA EXPUNGED].

Corpses with an undamaged larynx present within SCP-616 once SCP-616-1 activates seemingly reanimate for the duration of the flight. The corpses remain largely immobile, and as such, pose no physical threat, but are capable of speech. These speaking corpses should be terminated if possible, as their speech poses potential psychological dangers, as well as enable SCP-616-1's closing via [DATA EXPUNGED]. The language spoken by these reanimated corpses remains unidentified.

Addendum 616-01 The airliner series never went into service, as the various anomalous events surrounding SCP-616's test flights were reported as various design failures. All plans and blue-prints have been seized by the Foundation. It is now believed █████ █████████'s designs were entirely intentional and done under no external compulsion. Recovered documents from the construction process describe [DATA EXPUNGED].

Still-shot from footage from within SCP-616-1

Addendum 616-02 On █/█/████, A remote controlled rover obtained footage from within SCP-616-1. All personnel who viewed this footage directly committed suicide by various means within a two-month period. A security tape of the video with the recording playing did not cause any death, despite containing full sound and color recordings of the footage. It displayed a video of a small child violently being [DATA EXPUNGED] within a dark red room. All further attempts to observe past the "event horizon" have yielded similar results, and such expeditions are no longer permitted.

Addendum 616-03 Interview logs pertaining to SCP-616 are available in document Interview 616-AM.

Though the current containment procedures specify the necessity of Abrahamic faith and prayer to keep SCP-616-1 from closing, this necessity is in fact fabricated. After various interviews with [REDACTED], [REDACTED], a single test run, and [DATA EXPUNGED], it was determined that the belief in one's ability to keep SCP-616-1 open was ultimately the critical component to being able to accomplish the deed. However, it seems individuals in possession of this fact fare worse than individuals who are not at keeping SCP-616-1 open. Whether this is due to properties of SCP-616-1 or human psychology is unknown.

In regards to this problem, Dr. ████████ suggested using religion as an abundant and efficient way to harness belief. The current 'Satanic Markings' were in fact added by the Foundation. The requirement of an Abrahamic leader's blessing, as well as using ordained Abrahamic preachers for the act itself, are all for the benefit of maintaining morale and reinforcing belief. This method has proved successful, as each flight since the first has had fewer casualties and a shorter duration.