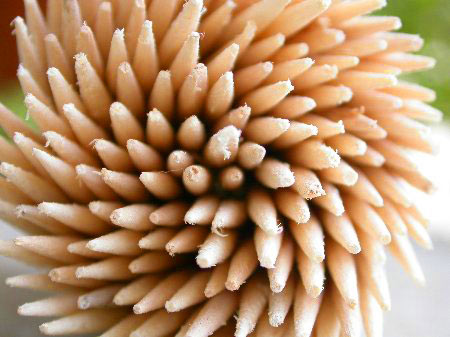 SCP-611 must be sealed within its specified enclosure at all times. SCP-611 should be provided with one piece of rotting meat per week, as per dietary standards. Current information suggests that beef tongue, aged at room temperature for roughly two weeks, provides the best nutritional results while limiting breeding.

Following Incident 611-1, SCP-611 has been relocated to a lower level. No food products may be allowed on the same containment level as SCP-611.

SCP-611 was first discovered in ██████, New Mexico in 20██. A group of tourists recently returning from ███████ contacted a local dentist concerning severe tooth and jaw pain. The doctor, discovering the infestation, contacted the Center for Disease Control, at which time the Foundation stepped in and took over. After extracting the larvae from the tourist group, Foundation operatives traced SCP-611 back to the ██████████ restaurant, which had unwittingly played host to them for over a month. Class-A Amnestics were administered to all restaurant employees and all infected patrons that could be located. Most larvae were removed in time, though some had already caused extensive damage. Over ██ deaths caused by subsequent infection were believed to have occurred.

SCP-611 is a previously undiscovered subspecies of Dermatobia hominis, the human botfly. It camouflages itself, appearing as a common toothpick, and will attempt to land near or actually in a supply of the objects, at which point it will shed its wings and enter a passive state. It can remain in this dormant condition for up to forty days before cessation of life signs. SCP-611 will lay eggs in the gums of a subject when used. Hosts notice no signs of invasion until four to seven days later when the eggs hatch and burrow into the jaw, causing severe discomfort.

The larvae cause sharp, continual pain and, if left untreated, can cause death by opening wounds for infection. The larvae will eventually consume enough to enter a pupae stage unseen in other botflies. Its body will harden and lengthen, eventually punching through the skin of the host. At this point, SCP-611 will take to the air and search for others of its kind with which to mate. The primary adult stage of SCP-611's life only lasts 72 hours at maximum, suggesting that there may be a larger presence of SCP-611 in ███████ than previously thought.

SCP-611 appears to be hermaphroditic, with no discernible difference between male and female members of the species. This is largely unheard of for insects, adding to the suspicion that SCP-611 might not be a naturally occurring phenomenon.

The highly specific nature of SCP-611’s adaptation to an invention only in use for a few hundred years is also highly suspect. Further testing is recommended to determine if this is a natural case of expedited evolution or a case of an engineered species.

Incident Report 611-1: On █████ ██, 20██, proper sterilization procedures of biohazard suit were not fully observed, and three members of SCP-611’s enclosure escaped containment. Two were discovered tapping against the enclosure’s glass observing room, apparently attempting to rejoin, but the third was not discovered until it had already made its way to Break Room 13.

The subsequent population generated by the initial infestation caused █ deaths and over ██ cases of severe mandible trauma. SCP-611 was subsequently relocated to a lower level with no break rooms or mess halls to limit possible accidental exposures. Individuals who suspect a possible breach should immediately report to Dr. █████ for oral examination and anti-parasitic treatment.