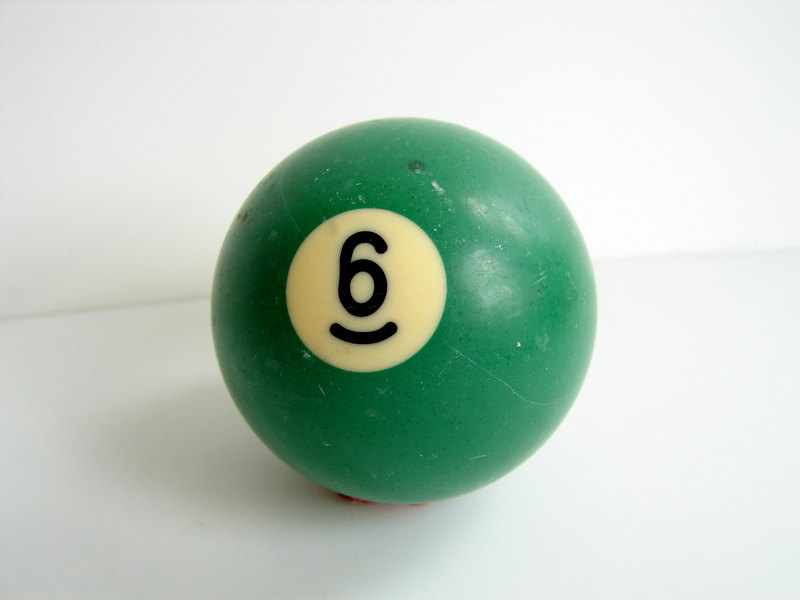 A non-anomalous replica of SCP-609-1 created for reference.

SCP-609 is to be stored in individual opaque containers inside a locker at Research Facility 5. All personnel must conduct Protocol 94-Wegner-Gyatso before observing any number of SCP-609-1 to ensure a clear and focused mind. Agents who locate instances of SCP-609-1 are to immediately break visual contact until the object is contained. UPDATE ██/██/██: SCP-609 has been transferred. It is now to be contained in opaque, locked bins at Storage Site 32.

Because control of SCP-609-1 is highly difficult due to ironic-process theory, only trained researchers with Level 2 Clearance and above are permitted to view it for experimental purposes.

SCP-609-A is to be secured in Storage Locker 11 at Research Facility 5. Viewing the text of SCP-609-A, in whole or in part, requires permission from the head researcher.

SCP-609 is a collection of identical green billiard balls in the American pool style which measure 57.15mm in diameter and are believed to exist only as immaterial manifestations of a concept. Instances of SCP-609, designated SCP-609-1, are unbound by physical laws. Each instance is impervious to damage, undetectable except by the naked eye, and unable to conduct heat; instead, they always feel cold to the touch.

SCP-609-1 can be manipulated by thought. When a sapient creature is in direct visual contact with SCP-609-1, it will emulate the actions the user imagines, including motion, duplication, and instantaneous manifestation at a visualized location. Observers cannot alter the physical appearance of SCP-609-1 or erase it from existence.

According to the object's documentation (SCP-609-A, as described below), SCP-609 is intended to be a literalistic embodiment of Plato's theory of form. Researchers have conjectured that SCP-609 can be controlled through visualization because SCP-609-1 and the concept of SCP-609-1 are the same object, and that SCP-609-1 cannot be damaged or otherwise mutilated because SCP-609-1 is a manifestation of an immutable metaphysical form.

If multiple observers attempt to activate SCP-609-1 simultaneously, an additional instance of SCP-609-1 will manifest for each observer. As a result of its thought-activated replication, SCP-609 has proliferated under Foundation custody. See Document 609-A for current estimates.

When SCP-609-1 is relocated to or generated in an area outside of the viewer's visual range, a recovery mission is required to resume full containment of SCP-609. Locations from which SCP-609-1 have been recovered include:

SCP-609 was recovered with a yellow box believed to be its packaging. The box is labeled "DR. WONDERTAINMENT'S ONTOLOGICAL 6-BALL™" in large text, although the typography differs in comparison to other products recovered from the same manufacturer. Smaller graphics below the title depict a marble bust of Plato with a speech balloon that says "IT REALLY EXISTS!" and an unidentified grinning woman exclaiming "NOW SUBJECT TO CAUSALITY!" A green pool ball is visible inside through a cellophane window.

The following text is printed on the back:

Hey, kids! Have you ever wondered whether your experiences are fully authentic or if only your thoughts are real and the world around you is a web of lies? Now the question is immaterial! With your new ONTOLOGICAL 6-BALL™, you can use your imagination to make the hottest new learning toy that cannot not be!

Did you create it, or did it create you? Don't put DESCARTES™ before the horse! If you don't think this is the grooviest toy out there, HUME MUST BE JOKING!

No copyright date, retail sticker, or other identifying information is present on the packaging. The package was not intended to contain SCP-609-1; the object seen through the cellophane window is a paper display insert designed to simulate a billiard ball. Instead, the object designated SCP-609-A is enclosed.

The remaining pages contain comprehensive instructions on "assembling" SCP-609-1 through careful, directed thought. Printed in 6-point type with no illustrations, the booklet describes in exhaustive detail the appearance, construction, physical properties and behavior, cultural significance and symbolism, and other aspects of a pool ball made in America ca. the 1970s, as related by someone in a state of severe mental distress.

Test subjects who read SCP-609-A in its entirety have demonstrated the ability to generate SCP-609-1 through concentration. Although amnestic therapy is ineffective in reversing this effect, it can erase knowledge of the ability from subjects' minds, generally eliminating its use unless the subject is somehow informed or reminded of the ability (through, for example, viewing a pool table, a spherical object, the color green, or the number 6).