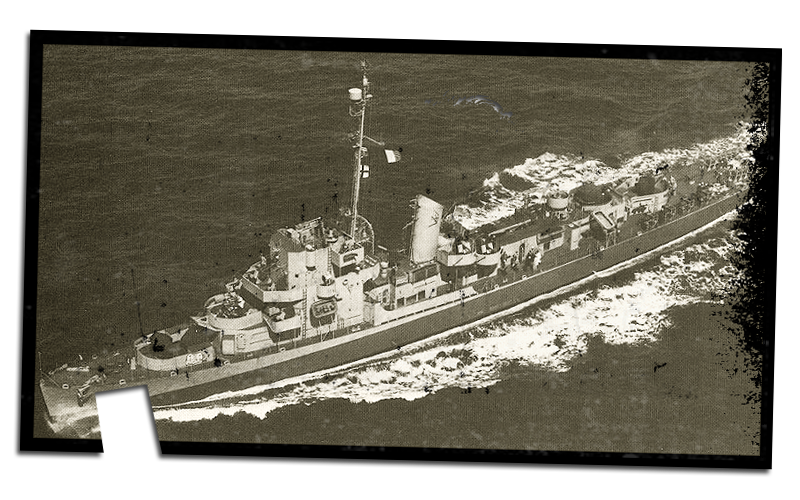 SCP-595 is currently stored in either enclosed drydock 2█, ██████████, Virginia, or a secure Foundation warehouse district in Philadelphia depending on SCP-595’s current state. Both sites are restricted without Level 3 access clearance or higher. Access to SCP-595’s interior is restricted to specially selected Class D personnel or mobile task forces with approval from either site’s local administration.

Due to the nature of SCP-595’s effects, it is imperative that no personnel or sensitive equipment be located within the storage sites after SCP-595 has been “dormant” for over two hours. Normal research activities may resume at one of the two sites after SCP-595’s documented effects have subsided.

SCP-595 is a Cannon class destroyer escort, DE-██ USS █████████, commissioned by the United States Navy in late 1942. It is no different from any other vessel of its class with the exception of several munitions magazines filled with [DATA EXPUNGED] of unknown manufacture. These devices cause the vessel and a limited surrounding area to be permeated with abnormally high levels of electromagnetic radiation.

Periodically the devices induce a tremendous spike in the amount of electromagnetic radiation, resulting in effects outlined in Document 595-1. While these spikes are mostly regular in their timing, they can result in severe damage to surrounding equipment and personnel if safety precautions are not strictly adhered to.

The ship is tied to reports of a secret US Navy experiment, “Project Philadelphia”, purportedly investigating principles of teleportation and possibilities of camouflaging naval vessels by bending light around them, rendering them invisible to the naked eye. The failure of the experiment resulted in the loss of nearly the entire crew. As they were unable to contain it, the US Navy agreed to turn SCP-595 over to the Foundation for further study. Unfortunately, information relating to the experiment has been made public. Cover-up efforts are detailed in an addendum below.

Document #595-1 SCP-595’s self-contained ████████████ devices are known to cause varying spikes in radiation levels at regular intervals approximately every three to four hours. When the Foundation acquired SCP-595 from the United States Navy, little was known of the devices’ side effects as the Navy had already destroyed almost all relevant documentation. As such, testing commenced in earnest, producing the following known results:

The foremost effect of SCP-595’s tremendous levels of electromagnetic radiation is that the ship can exist in one of two locations, varying randomly and requiring two teams of researchers to fully monitor SCP-595. The vessel has been observed, with lower bursts, to appear translucent and in some cases almost completely transparent to the naked eye, while remaining in place at its current drydock.

Any personnel located on or within a radius of ██ meters of the vessel while it is undergoing a radiation burst can be subjected to the following effects:

Personnel not located aboard the ship but still within its area of effect display effects similar to that of SCP-595 itself, sometimes reappearing in place but sometimes showing up at the other secure facility. There have also been occasions where these personnel have disappeared completely and did not reappear in any Foundation controlled sector. An incident of this nature occurring in 19██ resulted in the loss of ██ US Navy personnel, prompting the current containment agreement.

Persons in physical contact (either on deck or inside) with SCP-595 are subject to the effects listed above, but with markedly increased danger. These properties were discovered when Agent █████████ was trapped on the ship, faded out of sight and, upon returning, was fused to the bulkhead he had been standing near. Inspections showed a perfect molecular bond of tissue to metal, cleanly severing the entire lower portion of the agent’s abdomen which protruded from the opposite side of the bulkhead. When questioned, the agent reported feeling no pain but was unable to move his lower extremities and exhibited signs of extreme nausea and early stages of acute radiation poisoning. Attempts to recover the surviving portion of the agent’s body from the ship ultimately resulted in his death.

During the same incident, three Class D personnel had been assigned to clean the engine room. Most of D-12074 was found in a crankshaft, with his legs fused to the ceiling over a meter away from him. D-23574 was fused to a deck plate, and his lower extremities were never located, nor was D-75224, who simply vanished. Other cases have seen personnel molded into solid steel doors while still conscious, or alternatively missing limbs that are incorporated into the structure in other locations of the vessel.

Standard operating procedure calls for termination of these victims, as all efforts to sever them from the ship have resulted in death of the affected.

Addendum: As of the late 1950s, numerous books and eyewitness accounts have surfaced in attempts to shed light on the Navy’s failed experiment, further complicating containment procedures. Thanks to the efforts of well-placed field agents, the Foundation has managed to mostly discredit these sources, leaving the experiment as a well-known but “officially debunked” urban legend. All published accounts have been doctored to indicate DE-173 (USS Eldridge) as being the test bed for the experiment, thus drawing attention away from SCP-595. All previous records of the experiment have been successfully obtained or were destroyed by the United States government.

Addendum: Attempts to disable the devices located within SCP-595 have all met with failure, as the shutdown procedures documented in manual ██-3A require more than the allotted safe margins of time. The use of electromagnetically shielded remote vehicles is currently being investigated.