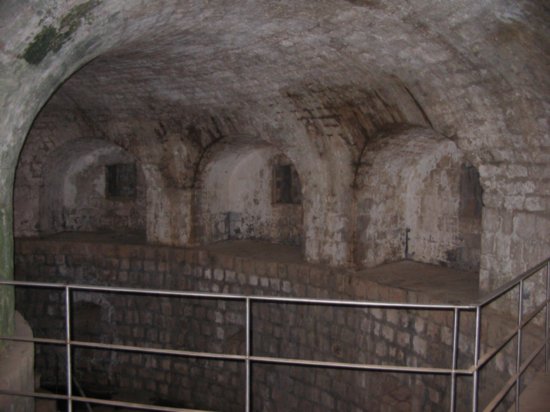 View of SCP-567 through security feed

Site-41 has been established at the former ████████ Castle for the purpose of containing SCP-567. The entrance to SCP-567 is to be kept sealed at all times. All cell doors are to be monitored off-site via CCTV. In the event that a door is opened or breached, Task Force Delta-9 "Hacks" is tasked with containing the instance of SCP-567-9 immediately. If containment proves impossible, termination is authorized.

Because of the nature of SCP-567, and the proximity to it that TF Delta-9 will be working, to join TF Delta-9 an applicant must:

SCP-567 is located in the dungeon beneath Site-41, located in [DATA EXPUNGED]. It consists of a series of eight cells, designated SCP-567-1 through SCP-567-8. With the majority of people/objects, the cells remain inert. However, when individuals meeting certain conditions come within 2.5 m of a cell door, shackles will materialize and launch from the inside of the cell, restraining the subject and dragging them within. Once the cell door closes and locks, both the subject and shackles vanish, leaving behind no trace of any kind. Each cell appears to have its own unique trigger conditions in order to activate, which seem to involve committing some sort of criminal or heretical act.1

SCP-567-8 is unique in that, unlike the other cells which all stand empty, it contains a single wooden chair. The chair is nailed to the floor in the center of the room, and appears to be many years old, though it does not rot. SCP-567-8 has never activated.

On rare occasions, the cell doors of SCP-567 will open and release an entity, given the designation SCP-567-9-X (the X being replaced with an integer). SCP-567-9 usually takes the form of a previously undiscovered creature, and is always aggressive. Once out of its cell, SCP-567-9 typically attempts to break out of SCP-567. There seems to be no common trait of the creatures given designation SCP-567-9, except that they tend to be very aggressive and relatively intelligent. As well, every instance of SCP-567-9 has had burn marks around its appendages. See Incident Report Log 567-4012 for details.

On only two occasions have individuals placed inside a cell by the Foundation re-appeared. In the first instance, D-903912 escaped from SCP-567-3 68 hours after being placed in it. Subject was suffering from severe injuries, including several lacerations, internal bleeding, and burn marks around his wrists and ankles. D-903912 died several minutes after re-appearing, before TF Delta-9 could reach him. In the second, D-937122 appeared 157 months after being placed in SCP-567-6. D-937122 attacked Foundation personnel on sight, despite also having suffered serious injuries including head trauma, several missing fingers, and burn marks around her wrists and ankles. Once restrained, D-937122 was interrogated by a member of Task Force Delta-9. See Audio Log 567-937122.

Heavy breathing is heard from D-937122. No response

Agent ███████-021: Look, I am very sorry, and I want to help you, but we can't give you medical attention unless you cooperate with us. So please, please state your name for the record.

Agent ███████-021: I apologize, but now we have the opportunity to….

D-937122: *interrupting Agent ███████-021* Fuck your opportunity! There is no opportunity! There is only escape! You called me a monster. Maybe I am one. But the nightmares……they…..*unintelligible mumbling*. Compared to their crimes, I've done nothing! Nothing at all! They [DATA EXPUNGED]. I haven't done anything wrong……nothing…….

Closing Statement: At this point D-937122 breaks down into hysterical sobs. Agent ███████-021 attempts to calm her, but she only grows more hysterical. D-937122 begins gasping for air, and appears to go into cardiac arrest. Attempts to revive D-937122 fail. During the autopsy, D-937122's body is revealed to be covered in tiny puncture wounds, and has an unknown toxin in her bloodstream.

Addendum 567-01 Further testing with SCP-567-5 has revealed that it is triggered by those who have committed adultery. It is also noted that not all individuals who have committed theft trigger SCP-567-1; consistent patterns have not yet been established.

Footnotes
1. These triggers and resulting responses are similar to other anomalies involving disproportionate law enforcement, such as SCP-1002 and SCP-2701.
SCP-566 SCP-568