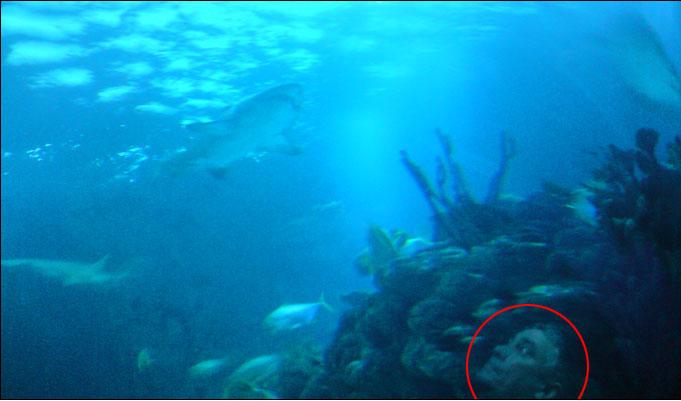 File photo of SCP-565. Note that the degradation of SCP-565 due to decomposition is significantly heavier at present.

SCP-565 is kept in a type three aquatic object containment tank on level 4B of Site-77. It is fed twice daily, and tested weekly for development or degradation of mental capacity. Staff who are so inclined may view SCP-565 during its scheduled feeding times by appointment with Doctor Schaeffer.

SCP-565 is an ambulatory human head, apparently male, which appears to mimic the behavioral patterns of Carpilius convexus, a species of coral crab. Its chief method of ambulation is the manipulation of tendrils of unfurled brain matter which emanate from a large crush wound at the back of its skull. These tendrils are often utilized as 'legs', allowing SCP-565 to scuttle along the seafloor like a crab, but occasionally are operated for motion and manipulation in a manner similar to the tentacles of an octopus or jellyfish.

To date, Foundation research has proven inconclusive on how and why SCP-565 remains animate, or how it is able to manipulate neural tissue in a manner suggestive of musculature. Testing is ongoing, but [DATA EXPUNGED]earchers who wish to contribute work or theory to the investigation of SCP-565 should contact Doctor Schaeffer through the usual channels for an appointment and transfer interview.

SCP-565 was caught by a fishing trawler called "Saturday's Child" off the coast of [REDACTED]terviewed Captain ██████ and was informed that SCP-565 had been sighted several times by local fishermen, and was apparently living as part of a crab colony in the area's reefs. Video footage taken by one such fisherman shows SCP-565 feeding on a dead clownfish. (See attached document 565-a for further[REDACTED]

SCP-565 is not immune to the harmful effects of exposure to a watery environment, and has continued to decay as is normal for dead tissue. It is estimated that SCP-565's decay will have advanced sufficiently to neutralize it withi[REDACTED]

Addendum 565-1 Forensics testing has linked SCP-565 conclusively to the DNA and dental records of Edward Belltram, deceased 12/28/████, approximately two years before the first known sighting of SCP-565. Belltram was murdered by his wife Rebbecca by strychnine poisoning and blunt force trauma to the back of the head, with description of the murder wound matching the wound through which the exposed cranial matter of SCP-565 protrudes. Doctor Schaeffer has proposed that Belltram's body be exhumed for analysis.

Addendum 565-2 Edward Belltram was exhumed by Foundation researchers on ██/9/████. The corpse had been beheaded, with wounds suggesting the head had been torn from the shoulders with extreme force rather than cut. Photographs taken by bereaved family members at Belltram's funeral show that the corpse's head was still attached at the time of burial, and the grave site showed no evidence of having been disturbed. Belltram's corpse was retained for study, and his grave restored with a substitute as per standard Foundation EMPTY CASKET protocols.