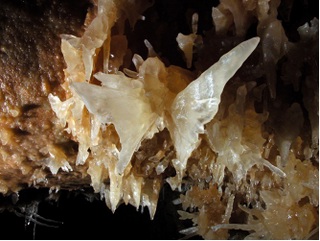 SCP-553 feeding on a stalagmite

The primary colony of SCP-553 is to be kept in the cave system they were discovered in, located in █████ ████████, China. Coordination with the Chinese Ministry of State Security has resulted in the surrounding area being declared a munitions testing range and off-limits to non-military personnel. Foundation agents have further encouraged local folklore which indicates that the cave system is inhabited by demons, in order to discourage casual exploration. A Chinese/Foundation security force is stationed on-site and will monitor the status of the colony.

125 instances of SCP-553 have been transported to Site-37 for observation and experimentation. They are kept in a 8 m by 17 m by 5 m steel-walled room whose interior replicates conditions in their originating cave system. Native cave flora and fauna are to be maintained in sufficient quantities to provide the appropriate nutritional needs of SCP-553. Multiple IR and night-vision cameras have been installed in order to provide full coverage of the interior, as well as numerous passive acoustic sensors.

Any personnel entering the chamber must only use the designated path and be wearing full body protection as laid out in Document 553-0-942-Alpha. Effective 06/01/20██, a decontamination airlock has been installed and all rooms and hallways adjoining SCP-553’s chamber are to be equipped with high-strength UV lamps as well as a humidity level of 50% or less. Industrial dehumidifiers are to be on hand in the case of containment breach.

SCP-553 in transition to adult stage

SCP-553 is a colony of approximately 140,000 winged organisms superficially resembling butterflies. They possess a silicon-based biochemistry and are composed primarily of calcium and silicate compounds. The body of a member of the species is mostly calcite, with some of the internal organs composed of a material similar to quartz with piezoelectric properties. This silicate impurity adds rigidity to the creature, giving it a rating from 3.5 to 4.5 on the Mohs Hardness Scale. Although they continue to grow throughout their observed lifespan, the growth rate slows considerably once they have entered their adult stage. The average observed wingspan of an adult is 2.3 cm.

The life cycle is notable in that it appears more closely related to crystal growth than standard biological growth. The creature starts out as a crystal seed, rather than an egg. Adult instances deposit them on stalactites, and they "hatch" approximately 12 days later. The larval stage appears as anthodites, and leach minerals from the stalactite using a weak acid. They move extremely slowly (approximately 5 cm per day), and leave distinctive tracks behind them as they progress. These tracks can be used to discriminate between genuine anthodites and SCP-553. The larval stage lasts approximately 70 days, at which point it becomes stationary and begins to grow its wings.1 During the transition from the larval to the adult stage, the wings of an instance of SCP-553 grow rapidly, becoming fully formed in less then 9 hours, at which point the adult will detach from the stalactite. Through an unknown process, SCP-553 maintains a relatively stable population, with eggs only being laid when an adult dies. The population transplanted to containment has stabilized at 137 +/- 2.

Members of SCP-553 primarily rely on a form of echolocation to sense their surroundings. They do this by creating a variety of ultra-high-pitched tones via scraping and striking their legs together, and appear to use their wings as a mobile array to detect reflected sound. Additionally, they appear to have a variety of chemosensors in their footpads, allowing them to determine the mineral composition of the surfaces they land on. Adult instances of SCP-553 primarily feed by scraping fungus and lichen from the cavern floor and, to a lesser extent, leaching minerals from stalagmites2 using a similar acid as used by the larval stage.

When any adult instance of SCP-553 suffers significant damage, it produces a unique sonar signature which alerts all other nearby adults to the presence of danger. Adults will swarm the perceived source of danger and proceed to attack it by attempting to slice it with their wings. The wings of SCP-553 members have an average thickness of 5 mm where they attach to the body, and taper rapidly to any average thickness of 0.05 mm with sharp, beveled edges. In testing, individual lacerations as deep as 1 cm have been measured. However, deeper lacerations usually result in some portion of the wing structure breaking off in the inflicted wound. These fragments typically continue to fracture in the wound due to mechanical stresses. The circulatory fluid of SCP-553 reacts with most carbon-based tissues in a necrotizing fashion, resulting in significant post-traumatic infections.

Incident 553-04-Gamma: On 05/21/20██, 21 instances of SCP-553 escaped their containment chamber due to an improperly sealed access door. They reacted to recapture attempts as an attack and retaliated. SCP-553 displayed a high degree of pattern recognition and target analysis and quickly focused their attacks on the exposed, fleshy parts of the containment personnel, particularly the throat and face. The 9 immediate fatalities received, on average, 10 wounds greater than 1 cm. It is currently hypothesized that these were caused by multiple slashes on the same wound site. The secondary necrotic infections caused by SCP-553 wounds resulted in a further 8 deaths. 12 instances were successfully recaptured and returned to containment and the remaining dead instances were retained for autopsy, structural analysis, and chemical analysis of their circulatory fluid.

Footnotes
1. Unlike known lepidopterae, SCP-553 does not possess a pupal stage.
2. Adults have never been observed to "feed" from stalactites. It is hypothesized that this is an adaptation to preserve food stock for the larval stage.
SCP-552 SCP-554