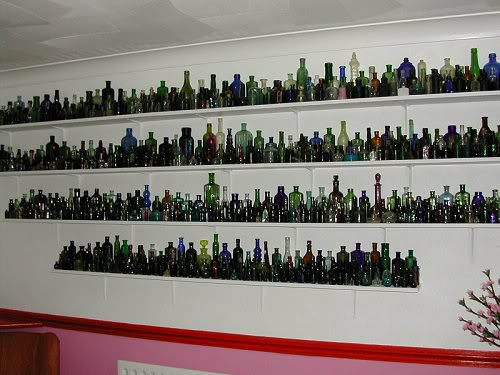 SCP-545 is considered to be three individual parts, and thus each part may be stored differently.

SCP-545-A is to be kept in a two-room, residential containment unit at Site 17 furnished to her liking. To date, she has not requested a TV, radio, nor any contact with the outside world beyond a walk through a park or woods at least once per week, available to her upon request. During said excursions she is to be accompanied by a team of 4 armed security personnel and at least one researcher familiar to her. SCP-545-A is allowed to leave her containment and spend time in Level 0 and common areas, provided that she notify two Level-2 security personnel ahead of time and is supervised during the duration of her leaving her room. SCP-545-A poses no immediate threat to any personnel, provided that they are reminded not to make assumptions about her strength, speed, or intelligence based upon her appearance.

All samples and bottles of SCP-545-B are to be packaged and placed in the appropriate storage unit, under lock. Only authorized Level-4 security personnel or higher may be allowed to handle, transport, or study SCP-545-B. Drinking SCP-545-B is strictly forbidden and punishable by immediate termination, unless under testing protocol. All requests to study and test SCP-545-B must be submitted at least a week in advance, and approved by a head of Site research, if not an O5-level operative.

SCP-545-A's unit is also to contain a small garden under sunlamps, available for her to work in. No poisonous plants are allowed after Incident 545-6b.

SCP-545-C is to be locked in a quad-locked secure storage vault in Site-17's Precious Items wing.

SCP-545 may be determined as three separate parts.

SCP-545-A appears to be an elderly woman, presumably of Eastern European descent. 1.5 m (5 ft) in height, and 73.9 kg (163 lbs) in weight, giving her a short, plump build. Her skin, although deeply tanned and heavily lined, is devoid of blemishes or liver spots otherwise common with age. Her hair is thick, completely white and past her waist when let down, although 545-A prefers to keep it up in a tight bun. Her eyes, despite her age, are a bright, clear blue and devoid of cataracts or fogginess. As a reward for good behaviour and cooperation, she has been allowed to choose a wardrobe of simple and traditional dresses and eyeglasses. Despite appearing to be 80+ years old, 545-A is in exceptional health, with no weakening of the heart, bones, or respiratory system. And although of average human strength, her senses are noted to be above-average, and she scores a general 115 on a standard IQ test.

SCP-545-A prefers to be called a number of names and dislikes the SCP designation number. She will respond to "Grannie", "Beatrice", "Ms. Widow", and has taken a liking to Dr. ██████'s nickname for her- "Totenkinder". She displays a generally pleasant personality and enjoys activities such as sewing, cooking and gardening. SCP-545-A often requests conversations and walks outside as well. Despite SCP-545-A's penchant for acting like a kindly older woman, she displays no remorse for her use of SCP-545-B/C.

SCP-545-A also displays a pathological fear of death and an addiction to SCP-545-B, and she complies with Foundation personnel under threat of being deprived of her supply of SCP-545-B. As the only known long-term user of SCP-545-B, 545-A's information is considered invaluable.

SCP-545-B is a colorless, odorless liquid extracted from the body via 545-C and bottled. It is often dubbed "Liquid Life" due to its properties. Under examination, 545-B appears to be slightly more viscous than water, but varies in direct texture and taste. 545-B has no unique properties until ingested.

Drinking SCP-545-B extends the life of the user, slowing the process of aging and often either slowing or completely ridding the body of disease. It may even be used to heal major wounds if drunk quickly enough. Repeated use of SCP-545-B may prolong life indefinitely, but results in a strong dependency upon its properties and many frequent users show borderline sociopathic tendencies in regards to the creation of SCP-545-B. To date, the SCP Foundation keeps a limited supply of SCP-545-B and allows for production only for study of SCP-545-C.

SCP-545-C is a thin, weathered sheet of yellow parchment, in surprisingly good condition; carbon-dating places it to be at least 600 years old. SCP-545-A claims to have copied SCP-545-C from the original document containing SCP-545-C's instructions. For lack of a better term, SCP-545-C contains a recipe in Middle English for extracting and distilling SCP-545-B from the human body. Full contents of SCP-545-C are undisclosed in order to prevent unauthorized personnel from creating SCP-545-B. Key portions include

SCP-545-A is able to recite and act upon SCP-545-C by heart; the exact mechanisms of the process that creates SCP-545-B are still unidentified.

"Magic" is not an acceptable answer. There has to be some sort of process here that allows for this to happen, it can't just "happen" because "it works."
Dr. ██████

Addendum: SCP-545 was located in a small Midwestern town, under the guise of an elderly woman with mild dementia. The woods her residential neighborhood were located in led to an area near a river that was prone to sinkholes and had a small history of children becoming lost or dying in the woods before. Her neighbors describe her as kind and caring, and had no suspicions that she may be anything more than a lonely, elderly widow with a penchant for giving neighborhood kids small treats in return for collecting their used glass bottles. She was located and captured by [DATA EXPUNGED]

From SCP-545-A's own memory, she has been repeating the same process for quite a while. She buys a small house in a relatively dangerous area and keeps the supplies for SCP-545-C with her, or manages to find and produce them. She collects glass bottles via the neighborhood and over time gains their trust. She describes the process of capturing children for SCP-545-C as being relatively easy. She simply goes for a walk and pretends to be lost, or talks kids into accompanying her home under the promise of food and candy. She admits to doing this at least once every five years or more.

She claims to have been using this process for at least 800 years, but has admitted that even though her aging has slowed to a crawl, it hasn't stopped completely, no matter how much SCP-545-B she produces and ingests.

SCP-545-B is not to be used or distributed even in cases of emergency. Failure to comply will result in termination.
O5 ████████████