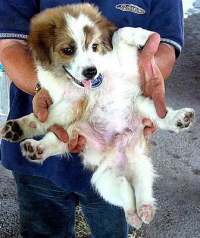 SCP-530 prior to containment.

No special precautions have yet proven necessary. "Carl" is very calm and friendly, and at this stage is free to move about the lower levels of the facility. "Carl" is free also to interact with SCP-529 as the two have proved non-hostile toward each other as well. Staff are not permitted to feed SCP-530 anything other than his approved food twice daily or his approved treats during training.

The coat of SCP-530 is also in a state of constant change. To date, 467 different hues have been recorded, as well as an unidentified number of patterns.

The most extreme flux comes from the growth or absorption of additional limbs, noses, mouths, eyes, ears and other body parts. While these typically do not last longer than 24 hours, a 3rd eye located slightly left of center on the top of SCP-530's head has remained since approximately one half hour after its discovery.