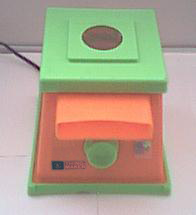 SCP-495 is to be kept in a locked room, plugged into a standard, active 120-volt power outlet when not in use. A life-sized mold of a clam, oyster, or other species of sessile bivalve1 is to be stored within SCP-495; the mold is to contain no more than 100 (one hundred) grams of wax.

In the event of a power failure, at least one Level 1 security personnel must enter the storage room and monitor the item for activity until power is restored. Researchers wishing to use SCP-495 must submit a written description of the planned experiment to Dr. ███████. Due to the results of Experiment SCP-495-██, all molds and materials must be approved by at least one Level 3 or higher personnel before use with SCP-495. At least one personnel with experience treating venomous bites and stings must be available on standby while SCP-495 is in use.

SCP-495 appears to be the oven from a 1992 ToyMax "Creepy Crawlers" playset, save that the "Creepy Crawlers" logo sticker has been replaced with the logo from a 1964 Mattel "Thingmaker" hot-plate (a toy of virtually identical function to the more recent ToyMax version, discontinued by Mattel in the 1970's due to insufficient safety features).

Addendum: Just because they're made of plastic doesn't mean they're safe. Where the venom comes from, I don't know, but Agent ██████ is now in the infirmary after being bitten by a tiny purple asp. Please treat the products of SCP-495 as you would any venomous animal.

Footnotes
1. Personnel are reminded that not all bivalves are sessile; in the event of the mold being destroyed, consult with an on-staff malacologist before obtaining a replacement.
SCP-494 SCP-496