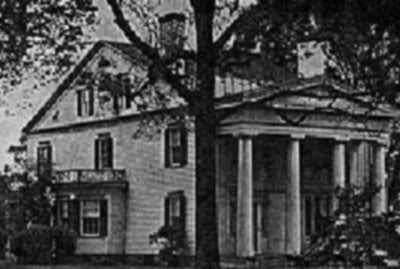 A picture of SCP-487 taken shortly after it was built.

Should containment protocols be compromised, any surviving Level 4 personnel are authorized to engage the containment failsafe. This will consist of demolition charges planted outside of SCP-487.

SCP-487 is a house located in the Northeastern United States in ███████████, ███████. The exact appearance and architecture of SCP-487 is impossible to definitively describe, as it constantly changes its appearance and structure depending on the arrangement of the items within it. Currently, SCP-487 appears as a significantly larger version of a Sears Catalog Home.

Within SCP-487 are roughly three thousand two hundred ninety four (3,294) items of occult or other superstitious origin. These items are carefully arranged throughout SCP-487 according to strict Feng Shui principles. Individually, none of these items show any kind of supernatural ability, and are essentially normal, non-anomalous items. However, it has been theorized by Dr. ████████ that these items are in such close proximity, and are arranged in such a particular way, that they create a synergetic effect that allows SCP-487 to bend or even violate the rules of physics. Initial testing by modifying the arrangement of certain items within SCP-487 appears to support this hypothesis (see Addendum 1-3).

According to historical records, SCP-487 was built in ████ and was owned by various families and individuals. Through coincidence or premeditation, every owner had spent their lives collecting numerous items of occult or superstitious origin. Background checks of all previous owners reveal nothing suspicious or out of the ordinary other than the apparent compulsion to collect said items. The Foundation first learned of SCP-487 in ████, when Agents intercepted a frantic call from █████████ ████████, SCP-487's previous owner, to a family friend regarding strange events related to SCP-487 (See Addendum 1). █████████ ████████ was administered an amnestic and relocated to ████████, ███████████.

Addendum 1 SCP-487's first recorded incarnation was a Georgian-style home. Inside, SCP-487 contained a basement level that was significantly larger than the building's blueprints indicated. Further exploration revealed an expansive maze of hallways, rooms, and doors with no discernible pattern. Exploration was temporarily halted when a researcher was separated from the expedition team and did not return. Search parties eventually found the researcher's camera intact. Analysis of the footage showed that the researcher had grown hopelessly lost and had become convinced that SCP-487 was stalking him. The researcher’s remains were also later found. Cause of death determined to be self-inflicted neck injury. Further exploration discontinued.

Addendum 2 After the accidental movement of Item 254, the basement area disappeared without a trace. Shortly thereafter, all modern electronic and mechanical equipment within SCP-487 ceased to function. However, when taken outside, all affected equipment began to function normally. Machinery and other technology powered by Industrial Age sources (ie: steam power) still function normally within SCP-487.

Addendum 3 SCP-487's current incarnation as a Sears Catalog Home came about as the result of moving Items 405, 772, 1056, and 2001 according to a certain mathematical pattern. SCP-487's dimensions now seem to be expanding at the rate of 0.3cm (.12 in) per month, necessitating the removal and relocation of the containment failsafes. Researchers have reported hearing groaning and growling sounds around the perimeter, though this is attributed to the stresses on SCP-487's structural materials as caused by its expansion.

Addendum 4 After the unauthorized removal of Items 991 and 1074, tracking satellites detected a massive accumulation of thermal energy just beneath the Earth's surface, centered around SCP-487's general location. The anomalous energy readings immediately dissipated once the missing items were returned to their original locations.