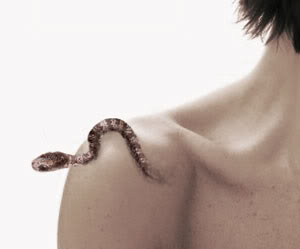 SCP-486 is confined at Site-17 in a two room cell, which may be furnished as the subject requests, provided it does not violate standard SCP procedures. The cell walls and floor should be padded and carpeted. SCP-486 must wear a cut-resistant safety glove at all times, although temporary removal for the purpose of hygiene is permitted. SCP-486 has displayed no extraordinary physical ability or attempts to escape. Nevertheless, the subject should be guarded at all hours by any two Level-1 security personnel. Should SCP-486 engage in self-destructive behavior, personnel on duty are to restrain and sedate the subject. If the subject manages to cause injury to herself while still unrestrained, personnel are to exit and lock the cell before contacting assistance.

SCP-486 is a Hispanic female twenty-nine (29) years of age. The subject has black hair and brown eyes, is 158 centimeters in height, and weighs approximately 63 kilograms. The subject is missing her left arm from the elbow. Aside from this handicap and her condition, the subject shows the physical needs and characteristics of a normal human being.

When SCP-486 experiences an injury that would normally cause bleeding, a growth resembling a reddish-brown snake of unknown species will emerge from the wound. The growth does not detach from the subject's body, and instead extends to approximately four times the length of the snake's head before halting. The size of the growth is proportional to the size of the wound. Despite being anchored to SCP-486, the growth appears to be autonomous and will attempt to bite any human within range, with the exception of the subject.

Venom milked from the growth's fangs is clear and pinkish in color. The toxins present in the venom are similar to that of snakes in the family Elapidae, and are lethal to human beings.

The growths may be surgically removed without anesthetic, as damage done to them is not felt by SCP-486. If the growths are less than 5-7 centimeters in length, they will wither after a period of 12-16 minutes into a dry scab-like substance. Growths exceeding 7-8 centimeters do not wither and must be removed by Level-2 medical staff who have been trained in handling venomous reptiles. The above deterioration will occur rapidly for any growth that has been removed in this way. SCP-486 does not sustain any scars or lasting injury, visible or otherwise, after the removal.

Injuries that do not result in external bloodshed, such as blisters, do not trigger the growth. In the case of internal bleeding, [DATA EXPUNGED].

Most other substances produced or excreted by SCP-486, including saliva, sweat, tears, and mucus, are normal. Examination of the subject's menses reveals [DATA EXPUNGED].

SCP-486 claims that the condition only developed when she was fourteen, with the onset of puberty. It is unknown whether the subject is fertile. Prior to her recovery, the subject had been married for █ years, but produced no children.

Addendum #486-1 Due to SCP-486's condition, retrieving blood samples is impossible, as is administering any injection. Sedatives must either be imbibed or inhaled.

Document #486-1 SCP-486 was discovered in ████, ███████, on ██/██/20██, when the subject was involved in an automobile accident. The subject sustained broken ribs, a moderate concussion, and avulsion of the lower left arm. The growth (██ cm in length) proceeded to fatally bite two paramedics and one witness before agents arrived on-site. SCP-486's family has been told that she and her spouse were killed in the crash. The subject, being unconscious, has no clear recollection of the accident.