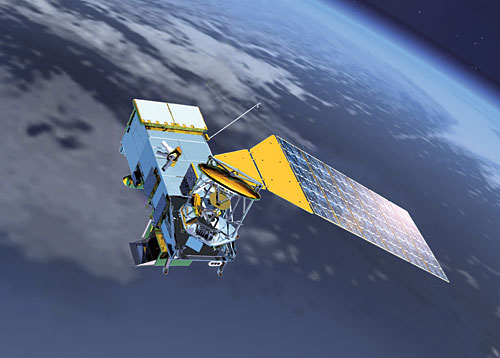 Observation Probe Delta-2 is currently in an elliptical orbit around Earth that allows it to regularly intersect the signal emanating from SCP-471. It is responsible for observing and reporting this signal each time it intersects. Delta-2 also possesses boosters capable of keeping it within the signal for extended periods of time for the purposes of testing or to monitor a significant deviation in SCP-471's signal.

SCP-471 was first discovered by the space shuttle Discovery during a routine maintenance mission to [REDACTED]. An anomalous signal was detected being transmitted away from Earth, which was traced back to SCP-471. Once Foundation agents within NASA had identified that the satellite was in fact an SCP Object, the Foundation took over the investigation and released a cover story, indicating that NASA had detected a top-secret military research project.

Since its discovery, SCP-471 has transmitted constantly, looping every ███ minutes. Only one interruption in the signal has been recorded (See Test Log 471-931). The signal is stronger than any the Foundation or any other Earth agency is capable of producing, and all attempts to block it have met with failure. As well, the signal is clearly directed; it is only detectable within a narrow cone (radius to height ratio = .0013) originating at SCP-471. The target of the signal appears to be fixed on Jupiter. See Addendum 471-01.

The contents of the transmission are heavily encrypted, and appear to be raw static when observed directly. Were it not for the strength of the signal, NASA would have assumed it was random static generated by the Earth's electromagnetic field. Over time, the signal has evolved, with sections of it changing since its initial discovery. A Foundation supercomputer, BOMB-2, was tasked with cracking the encryption and determining the contents of the signal. After running continuously for ███ days, BOMB-2 was able to decrypt a small portion of it, which appeared as a series of binary values. While most of the values' purposes remain unknown, several of them were identified to correspond precisely with discrete values relating to Earth, including:

██ hours after successfully decrypting this portion of the code, BOMB-2 suffered an apparent electronics malfunction. Investigation revealed that BOMB-2 had suffered damage consistent with that of an EMP; however, no other electronics in the area had similar effects. The Foundation created a new computer, BOMB-3, to pick up where BOMB-2 left off. ██ hours after beginning its analysis, however, BOMB-3 suffered identical damage to BOMB-2, despite being hardened against an EMP. Whether this is a result of a direct attack or a consequence of the contents of the signal has not been determined.

The method by which SCP-471 gathers data is currently unknown, and is under investigation.

Currently three (3) probes have been launched towards SCP-471 in the hopes of examining it more closely. See Test Log 471-931 for details.

Addendum 471-01 While attempting to glean the purpose of the integer values identified by BOMB-2, the Foundation discovered a copy of the signal transmitted by SCP-471, much weaker and with an 88 minute delay, being transmitted back at Earth. Investigation revealed that SCP-471 was transmitting its signal in such a way that it was amplified by the magnetosphere of Jupiter and broadcast in all directions. The copied signal evaded detection because it blended in with the background static naturally produced by Jupiter. Further investigation into the possible interaction of this signal with SCP-2399 and other Jovian based anomalies is ongoing.