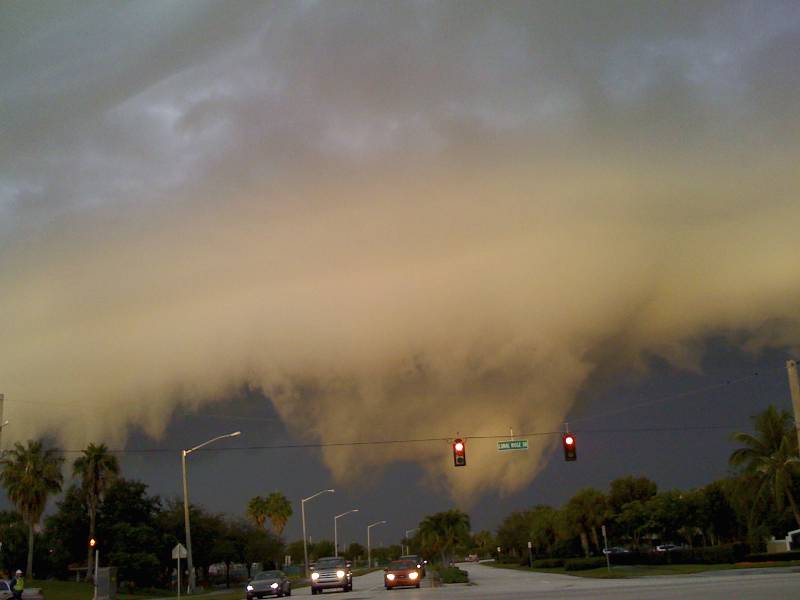 SCP-460 is to be tracked and observed by Mobile Task Force Mu-13, while containing any serious incidents as they occur. All relevant information is to be transmitted, encrypted, and backed up at Site 19. During any major ectoplasmic event, all personnel are to evacuate a minimum of 5 miles from SCP-460’s current location.

SCP-460 is a free-floating mass of cumulonimbus, with an average diameter of 3.5 km. Normally, SCP-460 takes the form of a large ring, and is unaffected by standard meteorological conditions that a cloud of its shape and size would be. The composition of the cloud itself is typical, with frozen water (H2O) making up 98.7%. However, the remaining 1.3% of the cloud consists of a highly active form of ectoplasm, which lends to SCP-460’s unique properties.

Typically, SCP-460 is dormant, floating at a speed generally relative to the current wind speed of the surrounding area. Occasionally, SCP-460 will halt its movement, usually over an area of moderate population. Once completely stationary, the ectoplasm of SCP-460 will condense and fall as a viscous rain, causing the spirits of the recently dead to manifest in a physical form as ghosts. This rain occurs as a light shower after the main downpour, with only intermittent pauses. Normally, only subjects who have died within the last year will manifest, with only the rare exception. Of note is that not only humans are capable of returning as a ghost, but also all sentient life that possesses a purpose for their manifestation.

Spirits that manifest in this have complete autonomy while SCP-460 remains stationary, and will revert back to whatever nature they possessed in life. The actual manifestation, however, varies on a case-by-case basis. Most subjects who return from a non-violent death are often passive and appear much like they did in life. Variations occur mostly among the spirits of those who suffered a violent end, with many victims of crimes such as murder and rape manifesting as ghostly avatars of justice. It should be noted that deaths caused as a result of SCP-460 would result in further manifestation.

Over time, the ectoplasm making up individual manifestations will “evaporate” and rise back up to the main body of SCP-460. This may take anywhere from several days to a few weeks, depending on the temperature and general humidity of the area. Once SCP-460 starts moving again, any remaining manifestations are instantaneously vaporized, and the cycle starts over. After becoming mobile, SCP-460 will wander for an indeterminable amount of time, with no pattern or common habits.

Discovered in ████ near Siberia, where reports of a literal “ghost town” had begun to circulate into the press at large. The number of ectoplasmic manifestations caused by the long-term stay of SCP-460 was overwhelming, and due to the violent nature of the now discontented spirits, a large military operation was required to secure the area. The surviving personnel now make up what is now Mobile Task Force Mu-13 aka. “Ghostbusters”. SCP-460 was immediately classified as a Keter class SCP, with all research diverted into predicting its movements to avoid further incidents.

Addendum: Due to the outcome (or lack thereof) of Incident 460-b and 460-c, item has been reclassified as Euclid.

All relevant reports from Mu-13 are to be catalogued and formatted as follows:

Subject: Richard Bellington, formerly a dock supervisor with ties to organized crime.
Date: █-█-████
DOD: ██-█-████
Location: ██████, NJ, USA
Cause of death: Drowning
Description: Overall manifestation resembled subject, but its clothing had changed from former work attire to an old-fashioned black and white prison uniform, replete with a ball and chain around the left ankle. Subject observed going to a local police station, and attempting to provide testimony to indict a local crime boss. Status of this investigation is ongoing. Dematerialized normally.

Subject: Alexsandr Daskovich, formerly an owner of a local bar.
Date: ██-█-████
DOD: ██-██-████
Location: ████, Russia
Cause of death: Cerebral trauma
Description: Manifestation resembled a monstrously strong version of the subject, demonstrating extremely aggressive behavior. Involved in an attack on owners of his former bar, leading to one (1) immediate death due to extreme trauma. Two (2) other deaths resulted after a fire inside the bar consumed the building. The cause of the fire is still unknown. Dematerialized shortly after.

Subject: Alex Grahl, formerly a notorious serial killer.
Date: █-██-████
DOD: ██-██-████ [Note, death occurred seven years before manifestation.]
Location: █████, Germany
Cause of death: Shot to death
Description: No resemblance to subject before death, resembled a twisted, disturbing interpretation of a norse troll. Manifested at place of death, a hotel where the subject had been gunned down by law enforcement. Subject proceeded to murder and partially cannibalize most of the hotel’s patronage and staff. Neutralized and dematerialized shortly after by Mu-13. First case of manifestation of a long dead subject.

Subject: James Strather, formerly a noted spiritual medium
Date: █-█-████
DOD: █-██-████
Location: ███████, GA, USA
Cause of death: [DATA EXPUNGED]
Description: Subject appeared incredibly vindicated, with his immediate action after manifestation being to inform every single one of his critics of this fact. Dematerialized early, the first example of living beings able to influence manifested spirits on the physical plane.

Subject: Spot, formerly a domesticated canine.
Date: ██-█-████
DOD: Unknown
Location: ██████, Ireland
Cause of death: Unknown
Description: Subject appeared to be a manifestation of a mixed breed dog of unverifiable heritage, wearing a small collar engraved with the name “Spot”. Upon contact with Mu-13, subject interacted playfully with several task force members. Subject followed Mu-13 during the entirety of the session. Dematerialized normally, to the dismay of Mu-13, which had grown fond of its company.