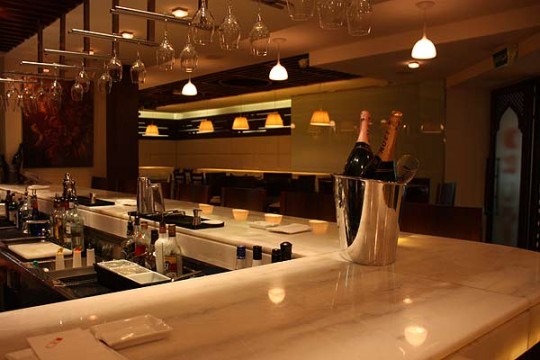 The bar and lounge area in SCP-453, under standard lighting conditions. Taken at 1200 hrs, during "off" time.

SCP-453 is to be staffed by no fewer than: four (4) bartenders, six (6) bouncers, four (4) cleaners, one (1) doctor, four (4) EMTs, and two (2) observation personnel, all trained Foundation staff, at all times. Additionally, ten (10) or more Foundation security staff are to be kept on standby in the adjacent outbuilding 453-01, connected to SCP-453 by basement access. All staff are required to familiarise themselves with Document 453-1, Complete List of Known Scripts and memorise all Scripts that have been flagged by the current on-site supervisor (Dr. Moriglioni). Failure to memorise flagged Scripts is grounds for immediate discharge from SCP-453 duty, and will result in a formal demerit on the offending personnel's record.

SCP-453 is to be locked and guarded between the hours of 0400 and 2000, local time; from 2000-0400 it is to be unlocked and open. Anyone entering the club during operating hours will have a radio tracking tag clipped to his or her clothing, and will remain monitored closely by closed-circuit cameras at all times.

During the day, SCP-453 is to be inspected and measured in all dimensions by staff. Any movement of fixed objects in the building are to be recorded and reported to head researcher Dr. Moriglioni. Fire prevention and violence suppression protocols are to be kept in accordance with Standing Order 405-991 section T; should movement of fixed internal structures violate this protocol, renovation crews are to be recruited to the site immediately for restructuring.

SCP-453 is a nightclub located in ██████████████, Italy, currently owned and operated entirely by Foundation personnel. Every night, an apparently random assortment of civilians from ██████████████ and adjoining municipalities arrive at the club; although the night invariably begins identically to any other club, over the course of the night the civilians present fall into "roles" in one of ███ currently documented sequences of events (termed "Scripts" by Foundation operatives working on SCP-453). Over the course of the evening, generally according to Script, civilians will depart the club and return home, maintaining only partial memories of the night. All surviving civilians depart before 0400 every night.

SCP-453 has existed in its current location for as long as Foundation records exist. Archaeological evidence suggests a wealthy Roman senator, known for extravagant nightly parties, had a villa in the location as early as ██ B.C.E.; the Foundation has had possession of the site since 1███. On several occasions the building has been torn down or destroyed; outdoor parties continued to persist nightly at the site. When the site itself is rendered inaccessible, civilian partygoers will gather as near as possible to the site and begin an impromptu street party; this party rapidly devolves into a riot (see Document 453-1, Complete List of Known Scripts, attached).

The club in its current configuration was designed and built entirely according to Foundation specifications. All core construction materials are SCP containment grade, to limit damage due to the more violent Scripts. Dr. Moriglioni has observed that the building has shown some self-mutational ability. Of particular note has been the gradual shift of the location of the secure locker containing suppression weaponry for staff use: it has moved closer and closer to the men's washroom. At this time it remains in the secure staff section. Other sections of the building have slowly moved and changed in similar ways.

A complete log of known Scripts is attached as Document 453-1. The 'selection' of a Script appears to be semi-random, although various stimuli will encourage particular Scripts to occur (for example, Script 117 "The Silver Harlequins" has only been observed when more than 15 club attendees are over the age of 60). Please note that while Script logs detail "pertinent events", all events in the club aside from staff actions become Scripted at around 2100 hrs (varies depending on Script). Participants begin speaking in Latin while engaged in Script, although music, dance styles, alcohol, et cetera remain "modern". Complete logs of all recorded actions, lines, and requests for each Script are available on request from Dr. Moriglioni. In its current configuration, SCP-453 has shown preference for three (3) Scripts in particular; these three account for roughly 80% of the Scripts seen, and represent a good cross-section of the general types of Scripts SCP-453 is capable of. These Scripts follow, listed in order of frequency: 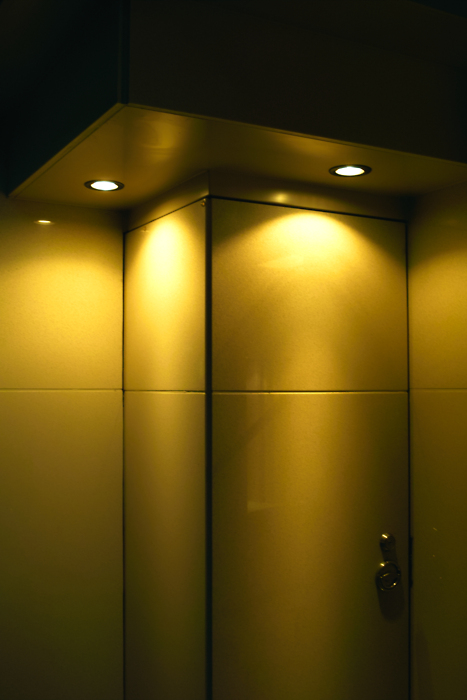 Men's washroom door in SCP-453. Captured during Script 43 as part of closed-circuit monitoring.

Low priority, low fatality; staff medical intervention required at 2307 hrs for 43-male-C, and recommended for 43-males-A and -B. Medical treatment of 43-wife at 2319 hrs is also recommended, but is conditional on consent from 43-wife as she will have left the script at this point.
Pertinent Events:

Aftermath: Despite the trauma of the events, 43-wife shows no memory of them the following day. When injuries are pointed out, she reacts with shock. 43-husband remembers the events vaguely, but will not believe they were anything but a nightmare. Reacts violently to interrogating Agent if pressed in this manner. The three 43-males remember getting in a bar fight, but not the cause.
Notes: None of the participants in this Script have any relationship or prior knowledge of each other. If introduced after the events of the Script, participants 43-wife and the 43-males will have an irrational hatred of 43-husband; this applies to anyone who has previously participated in the Script as one of these roles, even on different dates. 43-husband finds himself extremely attracted to 43-wife. Further post-Script introduction of 43-husband and 43-wife has been denied after [DATA EXPUNGED]. It is of some interest to note that despite capably handling the 43-males in combat, the Script appears to preferentially select a 43-husband who is diminutive in stature and in poor physical condition, while the 43-males are typically large and physically fit.
Experiment Log 453-s43:

Deviation: The male washroom is closed and locked after 43-wife enters.
Result: Four new individuals (43-locksmiths) arrive at the washroom almost immediately after it is closed, forcibly opening the doors in order to use the facilities. Events proceed as usual, with a 12-minute delay. These individuals appear to be able to circumvent any lock we have thus far applied to the door, including SCP-███.

Deviation: 43-husband is denied access to a full bottle of alcohol, given a glass instead.
Result: 43-husband takes a bar stool into the washroom. Participants 43-wife and 43-male-A and -C are killed instead of injured. Participant 43-male-B suffers irrecoverable spinal injuries1.

Deviation: Four (4) Foundation personnel enter the men's washroom and attempt to subdue 43-husband using suppressive weaponry.
Result: See video log 453-43-039. Foundation personnel subdued by 43-husband, who reacts immediately to the arrival of the Foundation personnel before any attack is made, disarming them and destroying their weaponry after suppressing them with it. Foundation personnel ignored from this point onward; Script proceeds as usual with a 3-minute delay.
Note: Direct intervention in Scripted events should be handled much more carefully in light of [DATA EXPUNGED]. We were very lucky this time. —Dr. Moriglioni.

High priority, medium fatality; staff are to immediately prepare the triage in room 453-12 on commencement of this Script at 2213 hrs. Medical intervention will commence at 2259 hrs. Most medical intervention will be aided by autopsy information from previous Script occurrences, attached in Document 453-s21-med.
Pertinent Events:

Aftermath: No participants in Script 21 show any memory of the actual events. All remember being involved in a violent bar fight, and remember that some people were badly hurt. Other memories are fuzzy, consistent with serious intoxication.
Notes: This is one of the historically most common events, having occurred for as long as the Foundation has known about this site. It has diminished somewhat in frequency. As the most violent of the common Scripted events, it is required that all SCP-453 staff be completely familiar with the exact sequence of all events in this Script, both for their own safety and to diminish civilian casualties as much as possible.
Experiment Log 453-s21: Special: To date, any attempted intervention in Script 21 has resulted in either neutral results (such as being unable to change the time required to prepare 21-senator's meals) or SCP-453 staff becoming part of the Scripted events, in which case the staff invariably suffers serious injuries. Further testing has been denied pending Level 4 authorisation. Previous logs are available on request.

Top priority, high fatality; if no known Script has manifested by 0000 hrs, staff are advised to prepare for the possibility of a Script 82 event; a weapons check is advised, followed by donning of riot gear and gas masks treated to resist type-14 neurotoxin. Civilians are to be told the riot gear is part of a theme night, and issued nonfunctional decorative goggles if they wish to participate.
Pertinent Events: Script 82 will not manifest until 0200 hrs; until this time, SCP-453 will be fully inactive, and events entirely mundane.

Aftermath: No surviving participants will remember Script 82, remembering only a pleasant night at the club, even if operation Pariah failed, with the exception of 82-prime. Those who participated as 82-prime will have recurring nightmares featuring [DATA EXPUNGED], typically leading to loss of sleep, decreased productivity, and eventual insanity. For this reason, staff should capture former 82-prime participants as they leave the club and remit them to Site-██ for therapy and monitoring.
Notes: Despite the severity of this Script, Pariah is typically extremely effective. An abort has not been necessary since ██/██/19██, and a full failure has not been observed since 16/12/1857. However, reports indicate that Script 82 has become increasingly common since [DATA EXPUNGED].