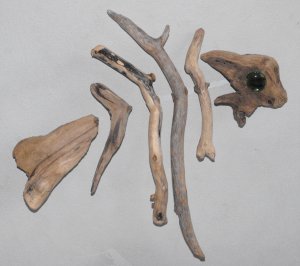 A specimen taken from the SCP-421 shoal

SCP-421 is contained near Sector-28 by means of a steel anti-submarine net positioned across the mouth of the bay found at █████████°N, ██████████°W. The net is to be examined for damage weekly by Sector-28 staff, or immediately upon observation of abnormal behaviour of SCP-421. Civilian shipping should be prevented from entering the bay; nautical charts have been altered to indicate the presence of subsurface rocks dangerous to vessels throughout the area.

The bay containing SCP-421 has been dredged by Foundation vessels to allow for simulation of a deep sea environment, as it is believed this encourages SCP-421 to remain docile. SCP-421 should be 'fed' on a bimonthly basis; standard feed consists of a wooden fishing vessel, typically at least 15 metres in length and preferably in a dilapidated condition. The feed vessel should be floated out into the middle of the SCP-421 bay before being scuttled. It is noted that SCP-421 could theoretically consume significantly more material than it is currently provided with; current feeding protocols are designed to maintain the total mass of SCP-421 at the present level.

SCP-421 is an organism comprised entirely of driftwood and other oceanic waste. The exact configuration of the organism appears to be in constant flux, but typically consists of a centralized body of relatively tightly packed driftwood surrounded by a shoal of smaller organisms similar in appearance and behaviour to fish. Individual members of the shoal are regularly subsumed or created from the main body and have demonstrated no ability to reconfigure themselves while separated from the bulk of SCP-421. It is hypothesised that SCP-421 possesses a hive intelligence similar to that observed in social insects; members of the SCP-421 shoal are able to travel independently for ██ km, beyond which they lose integrity and are reduced to simple driftwood with no known anomalous properties.

Though typically docile, SCP-421 requires a regular supply of fresh wood to maintain its mass; the role of the shoal appears to be to locate suitable material and transport it to the main body, within which it rapidly becomes indistinguishable from the wider mass of driftwood. Sources of this wood vary; SCP-421 has been observed harvesting wood from shipwrecks and collecting material floating at the ocean surface. SCP-421 has also been recorded assaulting ships, with the shoal typically ramming against a single point below the waterline until the target capsizes before stripping the vessel of all wooden components within reach.

SCP-421 was first encountered in 197█, following the unexplained destruction of a yacht owned by [DATA EXPUNGED]. Survivors reported sailing through an unexpected mass of driftwood that appeared to be moving against the prevailing current; soon after initial contact with the mass, the yacht was holed and rapidly began to sink. Reports that the driftwood appeared to be dragging parts of the yacht beneath the surface were dismissed by local investigators but attracted the attention of the Foundation, who assumed responsibility for the case. An extensive underwater survey eventually found some traces of the wreck of the yacht; an estimated 80% of the vessel's wooden structure was missing.

Sporadic reports of similar incidents continued throughout the next two decades, during which time SCP-421 is believed to have been responsible for the loss of █-██ vessels a year. SCP-421 was captured in 199█ and moved to its current containment location. Since this date, █ reports of events similar to its attacks have been recorded. It is speculated that at least one more wild shoal still exists.

Addendum 421-A During scheduled feeding on ██/██/20██ anomalous behaviour by SCP-421 was recorded. The shoal harvesting the provided wreck was estimated as 50% larger than normal, resulting in a far quicker assimilation of material into the main body of the SCP. Subsequent monitoring of SCP-421 revealed that the central mass had condensed into a denser configuration than normal and that the feeding shoal did not subsequently rejoin it, instead remaining in close proximity as a cloud surrounding the main body.

Two days after initial observation of anomalous behaviour, the central mass of SCP-421 was recorded settling close to the sea floor. A part of the shoal was observed to leave the cloud and begin moving around the compound in what has been described as an exploratory pattern, seemingly in an effort to retrieve any material not yet subsumed into SCP-421. Though it had decreased in density since the feeding, ultrasound monitoring of the main body appeared to indicate the formation of a solid structure within it, distinguishable from the standard mass of SCP-421 as not being in constant motion. On this basis, authorization was granted for the use of an ROV to examine the interior of the central mass.

Upon deployment of ROV ██-█ the SCP-421 shoal appeared to become agitated. ROV ██-█ was able to successfully penetrate the outer cloud surrounding the main body of SCP-421; contact was lost soon after. The wreckage of the ROV was subsequently drawn into the central mass of SCP-421; this is believed to be the first time SCP-421 has damaged a non-wooden vessel.