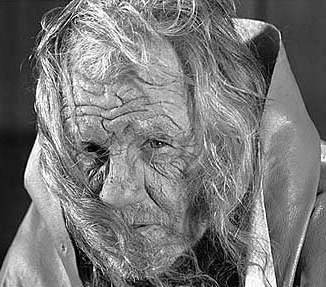 SCP-411 is to be kept in a standard humanoid containment suite at Existential Isolation Facility ██ at [O5 CLEARANCE REQUIRED]. All reasonable requests made by SCP-411 are to be met where possible. A bank of television screens displaying 24-hour news coverage is to be provided for SCP-411's use. Requests for texts and devices that do not yet exist are to be filed until such a time as they can be assessed. At the moment SCP-411 is not considered a containment risk. All information gathered from SCP-411 is to be stored at the Existential Containment Unit and is to be disclosed at the discretion of Dr ██████ only. All staff leaving Existential Isolation Facility ██ are to be administered with Class A Amnestics.

SCP-411 is a grey haired, blue-eyed, Caucasian male of incredibly advanced age. Estimates of his biological age, based on information divulged in interviews, are in the region of 400 years. SCP-411's nature means that special interview and linguistics training is required by all research staff.

SCP-411 ages in reverse, growing younger at the same rate that a normal human ages. SCP-411's memory also functions in reverse; SCP-411 has no recollection of past events but can recall the future.

Much of the information we have gathered about SCP-411 originates from the work of a Dr. Lyetacker, an individual who appears not to work for the Foundation as of yet, via the recollections of SCP-411 himself; as such, caution is to be used when applying this information.

SCP-411 speaks an as-yet-unknown dialect of English that has significant grammatical and vocabulary deviations from Modern English. Individuals who are to be given training in this language will benefit from a background in Spanish, Mandarin and/or Cantonese, ██████ and Haskell.

SCP-411's ability to recall future events is hindered by his advanced biological age; events more than a few months into the future are often forgotten and the details of events in the near to immediate future are often vague and unclear. Events surrounding persons he is familiar with are often more clear but omissions are not uncommon. In addition, deviations from SCP-411's memories of the future cause SCP-411 significant mental harm and can often render him catatonic for days. Due to the potential for valuable data to be lost in this fashion, particularly as one recollection often triggers other more significant recollections, SCP-411's memories are only to be acted upon in the following situations:

While a full course of training is required to interact with SCP-411, the following guidelines should be followed if emergency meetings are required.

It is unknown when Dr. Lyetacker will join The Foundation but it has been decided that he is not to be actively sought. Upon his eventual recruitment, a data breach is to be staged and all information regarding SCP-411 is to be wiped to prevent ontological paradoxes regarding SCP-411's abilities.