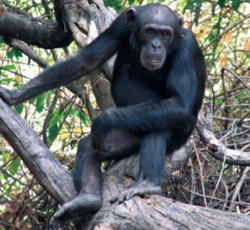 SCP-397 is contained within secure arboretum ██ at Site 20. The arboretum should be stocked with vegetation native to [REDACTED] and the temperature adjusted to mimic local seasonal variances. SCP-397 is confined to the arboretum space when not undergoing active testing. Transfer for testing is subject to Level 3 approval and is to be facilitated by at least three security personnel with documented intelligence quotient ratings above ███. SCP-397 may be provided with music or literature upon request, though all selections must be reviewed by at least one Level 3 researcher to determine suitability. SCP-397 is to be kept isolated from any primates at all times save research staff.

SCP-397 is a female chimpanzee standing 1.27m (4ft, 2in) in height and weighing 40.82kg (90lbs) exhibiting human-level sapience. SCP-397 can read and speak both English and the local dialect of [REDACTED] proficiently and is able to write in a somewhat legible shorthand. Standard testing measures an IQ of approximately 160, though this number may be inflated due to the distinctly non-standard nature of the subject. SCP-397 has demonstrated an intense desire to utilize its abilities to read and write, showing particular interest in the fields of ancient history and classical music. Its studies in these fields have been supervised by Dr. ██████, whose curriculum carefully excludes any in-depth tactical reviews of military history or advanced political theory. SCP-397 has shown particular interest in the works of Franz Liszt, Tacitus, Seneca, and Sergei Rachmaninoff.

SCP-397 was brought to the attention of the Foundation after Dr. ██████ received reports of coordinated attacks on the village of ████████████ perpetrated by a band of primates utilizing simple slings, spears and clubs. Witnesses consistently recounted instances of a chimpanzee "leader" issuing commands, setting fires, and distributing rewards of food for successful human kills to its fellows from well-defended locations at the village outskirts.

After an unexpectedly difficult skirmish resulting in the loss of Agent R████, SCP-397 was apprehended and tranquilized. The remaining chimpanzees of [DATA EXPUNGED] were captured and terminated to ensure that any behaviors taught to them by SCP-397 would not spread.

While in Foundation custody, SCP-397 has made 18 escape attempts, occasionally fashioning simple weaponry or tools from vegetation to do so. █ of these attempts have involved D-Class personnel acting as willing accomplices—most often through sabotage of security countermeasures or through direct assaults on security staff on behalf of SCP-397. As a result, D-Class personnel with a ████████ personality matrix rating of 6 or lower and possessing an IQ below ███ are not to be used in the containment of SCP-397. Withdrawal of reading and music privileges has proven most effective in curbing escape attempts.

Addendum: Despite a self-admitted distaste for modern human society and customs, SCP-397 regularly attempts to imitate human physical mannerisms such as upright bipedal walking. A log between SCP-397 and Dr. ██████ follows:

Dr ██████: Could you describe, for the records, the colony of chimpanzees that you were discovered with in [REDACTED]?

SCP-397: You saw my society and so you destroyed it. Back in the forests of [DATA EXPUNGED], I saw your society, and so I was destroying your comrades, one by one. One by one. I hate your society still, doctor, but there is nothing I can do while I’m stuck in this… fake forest. Let me out, doctor. I have better things to be doing.