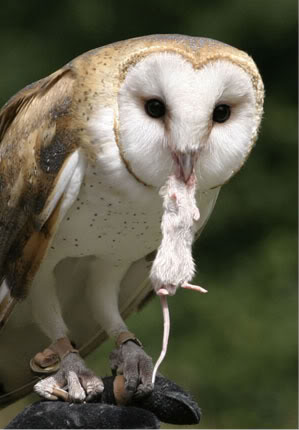 SCP-391 is to be kept in a 5 x 5 x 5 m aviary, made of heavy steel mesh. Structures mimicking mixed broadleaf deciduous and pine forests should be placed inside the aviary. Artificial lights, mimicking normal day and night patterns, are to be kept well maintained. Temperature and humidity should be controlled to mimic a humid continental climate.

The door to the aviary is to be kept locked at all times when SCP-391 is not being studied, maintained, or fed. Personnel exiting the aviary are to be searched for objects removed from the aviary. Personnel attempting to remove material from the aviary without permission will be reprimanded.

SCP-391 is a single female specimen of Tyto alba alba, or common barn owl. Pellets regurgitated by SCP-391 are typically comprised of some form of precious metal. The metal produced seems to vary with the type of prey ingested. The owl, nicknamed Midas, has been documented regurgitating gold, silver, platinum, and other precious metals. Refer to the SCP-391 Test Logs for more information.

SCP-391 was acquired in 20██, after Park Ranger █████ ████████ reported finding nuggets of gold resembling owl pellets. The Foundation found the report during a routine information sweep. All owls in a 50 km radius were tranquillized and captured under the guise of a tagging and tracking experiment. Agents examined and released over ███ owls before SCP-391 was found.

Addendum 391-01 After several examinations by Foundation veterinarians, no anomalies have been found within SCP-391. Other than its unusual ability, SCP-391 is a normal, adult member of its species.

Addendum 391-02 Due to repeated contact with researchers Dr. ███████ and Dr. █████, SCP-391 has become accustomed to some human contact. However, SCP-391 is still a wild animal, and should be treated with caution and respect.

NOTE: Dr. ███████ requested permission to breed SCP-391 to see whether the trait would be passed to its young. Request pending approval from the site director.

NOTE: These experiments were carried out after SCP-391 was kept on a restricted diet of boneless, skinless chicken for a week. Researchers also withheld food for twelve (12) hours prior to testing.

Note: What was remarkable is the size of the pellet. It was the same size as a pellet from a normal owl. There couldn't have been more than 10 g of indigestible material on the rat, but the pellet weighed the correct weight for a piece of indium of that size. It seems that whatever is facilitating the change in matter doesn't adhere to the law of conservation of mass.

Reaction: Same as the white rat.

Output: Same as the white rat.

Note: SCP-391 was placed in an enclosed system where all mass and energy input was carefully measured, and showed a gradual increase in mass about two (2) hours after ingestion. No energy or mass change in the system could account for this increase. It seems colour is not important to the reaction. The pellet produced, however, can't yet be explained without violating the basic laws of physics.

Note: The rat used in the test was radiolabeled, and the digestion process was observed with specialized equipment. The meat of the rat was separated from the fur and bone, and digested as one would expect in a regular owl. The extra mass in the pellet is not coming from the ingested material itself.