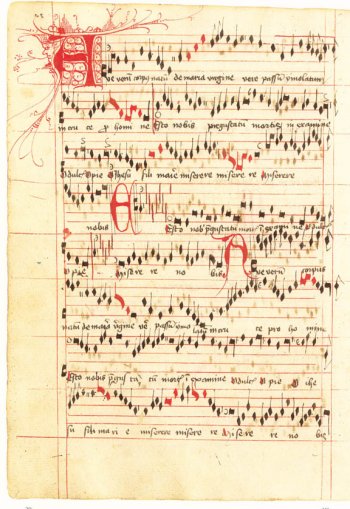 SCP-381 is to be kept in a 23 x 31 cm document envelope in Storage Unit-05. Further containment procedure is not necessary under non-testing conditions. Non-Roman Catholic Christian (i.e., any Protestant denomination) research staff are not permitted to perform tests on SCP-381 due of the risk of combustion; other Abrahamic or non-religious personnel are not at risk.

SCP-381 comprises 7 unbound pages of yellowing paper sheet music. Chemical analysis has confirmed that the ink on the paper is made of a mix of a solution of tannic acids with ferrous sulphate and gum, consistent with a recipe for ink contemporary with the paper’s estimated year of production (15██ CE).

Each page contains 8 bars of a contrapuntal, polyphonic, Baroque choral composition with overlapping harmonies written for bass, baritone, tenor, and soprano/castrati vocal parts. None of the script is legible with the exception of the rubricated capitals interspersed throughout the piece.

Anyone who touches SCP-381 abruptly begins to sing from the beginning of the composition in a range suited to their age and gender but with professional-level competence. By measure █, other voices will have joined: such voices emerge from the air around the SCP, and sound like a choir made up of between ██ and ███ members, singing lyrics in Latin that translate to [DATA EXPUNGED]. When the singers reach measure ██, all non-Roman Catholic Christians in the area (including the singer, if applicable) will spontaneously burst into flame that extinguishes only upon cessation of life function and cannot be extinguished by any available means. The flame is otherwise normal, emitting heat and light as would be expected.

SCP-381 was recovered by Agent ██████ in █████, Spain on ██-██-██. It was found in an unopened envelope sealed with the arms of Philip II of Spain, along with the preserved skeleton of a messenger (further examination of the skeleton revealed probable cause of death as [DATA EXPUNGED]). Along with SCP-381, the envelope contained a written note to “HRM Elizabeth I on the event of her Coronation,” expressing Philip’s congratulations and wishes for a prosperous rule, and the contents of the envelope are noted as “a composition to ryvle the beauty of even Your Majesty.” The missive is dated 28 December, 1558.

Addendum-381-1 Research in the Vatican Archives by Dr. ███████ with the help of Cardinal ████████ has revealed a work commissioned by Pope Paul IV matching the description of SCP-381, though no mention of any unusual combustive properties is mentioned. The piece was commissioned from Italian composer ███████ █████████, who notably vanished after he [DATA EXPUNGED].

Although this information is largely irrelevant to the status of the SCP today, it is of great historical interest when framed in the politics of the Protestant reformation and Catholic counter-reformation. General Bowe is obviously not the first to try to weaponize SCPs. – Dr. ███████