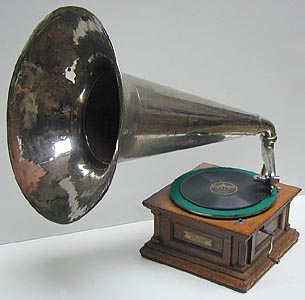 Note from Head Researcher ████: The potential implications of this device for both SCP-373-A entities and their former loved ones require a certain degree of composure with regards to its use. Quite frankly, we may be creating these beings rather than channeling them. Personnel unable to react responsibly with that degree of power are not to be allowed access.

Note from Head Researcher ████: Testing suspended until further notice. See Addendum 373-3. Testing with D-class personnel to be carried out as per Addendum 373-4.

For maximum efficiency in gathering intelligence regarding SCP-373-A entities, all records used with SCP-373 should be 33 1/2 rpm vinyl albums with lyric-heavy songs or spoken-word tracks. Audiobooks, comedy albums, and other principally speech-based records are encouraged; principally instrumental or orchestral music is forbidden.

SCP-373 is an antique disc phonograph player. Markings on the machine indicate it was built in 191█; an additional label indicates that the device was modified in late 194█ at a facility called "█████ Laboratories, Inc." The device is composed of a crank-operated turntable embedded in a wooden case, a tone arm with an aluminum stylus, and a slightly tarnished silver horn.

SCP-373 appears to have the ability to modify the audio of any record played on it according to particular patterns. Specifically, research has demonstrated that approximately every fourth word or phrase will be altered from the originally-recorded song or monologue. These new words can be organized sequentially to reveal what appear to be messages or statements from a series of unknown entities. These entities have been named SCP-373-AX (with "X" to be replaced with a numerical identification as entities are discovered). The entity is able to communicate for the duration of each instance of the playing of the record; upon the next playing of the same record, the same entity will begin speaking, but will claim not to recall the previous conversation.

Due to the stilted nature of the communication, it is rare for the entities to communicate any significant amount of information to Foundation researchers before the end of the record. However, research has demonstrated that two-way communication is possible, by lifting the needle from the record while it spins and speaking into the horn. Any attempt at useful communication requires both parties speak while the record spins at the speed at which optimal playback was intended; all SCP-373-A entities report that speaking into the horn with the record slowed or stopped results in a high-pitched squeal for the entity, and vice versa.

Testing with anomalies such as SCP-043 and SCP-1668 did not initially produce data. However, analysis of audio taken during testing has shown the presence of at least two distinct breathing patterns being broadcast from SCP-373. Further scheduled testing is currently under consideration.

Entity: SCP-373-A3
Runthrough #: 1
Record: Painkiller by Judas Priest
Notes: An early attempt at scientific analysis of the phenomenon, both the choice of music and questions were largely arbitrary. Two-way communication not yet understood. Full lyrical output is included below to demonstrate effect; all future entries will include only relevant utterances.
Results: Playing of Track 1, "Painkiller," resulted in the following lyrical output:

Entity: SCP-373-A3
Runthrough: 8
Record: Painkiller by Judas Priest
Notes: First consistent and notable demonstration of two-way communicative potential. Communication redacted to relevant utterances for convenience.
Result: The following interview was carried out by Researcher Kim with Entity SCP-373-A3.
Kim: (speaking as record begins, needle up) Hello. Please try to stay calm. You've had an accident and we are working to save you. Can you tell us your name?

Kim: Could you please tell us your name?

Kim: You're okay, Mary. Can you tell me what you see?

Kim: We're very close to getting you out, just hold on tight. Can you tell me where you live and what day it is?

The record ends. Flipping the record results in the conversation beginning again, as in all other tests.

Entity #: SCP-373-A24
Runthrough: 2
Record: Item -π-2
Notes: Item -π-2 is a vinyl record pressed by Site 38 for testing purposes, consisting of a rapid (though clearly audible) reading of Charles Dickens's A Tale of Two Cities. The speed at which the book is read allows for approximately 720 words per minute, increasing the potential conversational ability of the ensuing SCP-373-A entity.
Result: The following is the interview between Researcher Kim and SCP-373-A24.

Kim: Hello. There's been an accident. We're trying to get you out, but we need you to remain calm. Can you tell us what the last thing is that you remember?

Kim: I'm sorry, I can't understand you. What is the last thing you were doing?

Kim: (knocking down Lucas, grabbing SCP-373's horn, shaking) I'm going to get you out of there! Just wait!

(Several agents enter the room and drag Researcher Kim out by force, knocking SCP-373 to the ground in the process)

Addendum 373-2 SCP-373 entities have been showing a greater tendency to present themselves as relatives or close friends of Foundation personnel in the last two months. This has begun to take place in spite of deliberate efforts to choose records at random; statistical probability suggests it to be highly unlikely that we have been selecting these particular individuals without some influence on the part of SCP-373. Requesting a halt to testing until a pattern can be discerned. —Researcher Lucas

Addendum 373-4 Four different researchers have been caught over the last three weeks attempting to access SCP-373 for personal purposes. In one instance, a researcher successfully began to use a record already believed to contain one SCP-373-A entity, at which point he was able to communicate with his deceased daughter. Present opinion among Site 38 command is that SCP-373 is deliberately manipulating its users into emotional distress; additionally, given the disregard for security protocols being shown now by experienced Foundation researchers in the face of SCP-373, we are forced to conclude that the object becomes increasingly determined to force individuals to use it as time passes between usage, much in the way predators become increasingly desperate as time passes after feeding. Suggesting that D-class personnel be allowed to use SCP-373 twice weekly in order to prevent further deterioration of conditions here. —Researcher Lucas