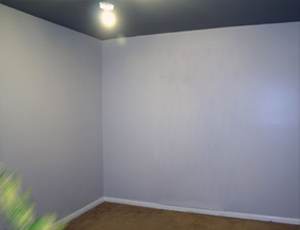 SCP-372 is to be contained in a cell, 5m x 4m x 2m, lined with reinforced plexiglass. Embedded into each of the four walls of this cell will be one infrared motion detector. Feeding will take place once every two weeks, to consist of 1 kg of red meat and uncooked vegetables, to be deposited in its cell via chute.

All guards working near SCP-372's cell must wear helmets with cameras mounted in the forehead, with live feeds to the nearest guard station. In the event of a containment breach, an alert will be sounded that all personnel should watch for any brief flickering movements in the corner of their eyes, and to report immediately if one is sighted.

SCP-372 is a creature of unknown genus, approximately 2 meters long from head to tail and weighing approximately 45 kilograms. It has a long, thin body with eight pairs of narrow limbs.

Analysis has shown that its muscle fibers are [REDACTED], allowing for extremely fast and precise movements. Every part of the body is abnormally flexible, and the limbs are coated with small fibers that cling to almost any solid surface.

In place of eyes or ears, it has [DATA EXPUNGED]. This sensory organ is capable not only of echolocation but also of detecting energy transfers, such as the electrical impulses in the brains of nearby beings. SCP-372 has learned to time its movements to those pulses, predicting the movements of any being around it. It uses this technique to hide, either by hiding behind the head of a person looking for it or by hiding in their scotomas (blind spots) and saccades (clipping during eye movement).

SCP-372 first came to the attention of the Foundation on █/██/████, when an undercover agent working at █████████ ██████ reported seeing a creature that resembled the described “hallucinations” of one of the patients (Mr. ████ ████████). After thorough investigation, SCP-372 was captured via [REDACTED], and it was determined that it had, for unknown reasons, been tormenting the unfortunate patient. It had confused him by periodically following him and remaining within sight of him while hiding outside the visual fields of those around him, making him believe that he was hallucinating a “monster” no one else could see. Unfortunately, the patient had by this time actually become mentally unbalanced due to stress, and [DATA EXPUNGED].

Participants: 2 D-Class Personnel
Location: Empty room, 6m x 5m x 3 m
Test parameters: D-1 was instructed to stand in the middle of the room, D-2 in the corner. Both were to perform a visual search of the room. SCP-372 was released into the testing room. After five minutes, armed personnel entered and ushered SCP-372 back into its holding cell, and D-1 and D-2 were debriefed.
Results: After five minutes, D-1 reported no sighting, and D-2 only detected a few brief flashes.

Participants: 2 D-Class Personnel
Location: Empty room, 6m x 5m x 3 m
Test parameters: D-1 and D-2 were instructed to stand in opposite corners of the room, and make a visual inspection of the room once SCP-372 was released into the containment room.
Results: After five minutes, both D-class had sighted SCP-372 fifteen times (both at identical times). It is believed that SCP-372 was darting around in the spots where the blind spots in their vision overlapped, and occasionally had to break cover and dart into another one when one area was no longer overlapping.

Participants: 4 D-Class Personnel
Location: Empty room, 6m x 5m x 3 m
Test parameters: D-1, D-2, D-3 and D-4 were instructed to stand in the four corners of the room and watch SCP-372.
Results: Approximately 1.5 seconds after SCP-372 was introduced into the testing area, D-3 shrieked and collapsed, spurting blood from a wound on his [REDACTED] that seemed to have spontaneously appeared. D-1, D-2 and D-4 abandoned their stations and ran for the (locked) exit. D-4 began pounding on the door before he was also injured, losing one ███. D-1 and 2 retreated into one corner, D-1 curling up into the fetal position while D-2 stood absolutely still. No activity was reported for the remainder of the five-minute test. When the test was ended, D-3 had expired, D-4 required surgical [REDACTED], and D-1 and D-2 were not physically harmed. None of the surviving test subjects reported seeing SCP-372 at any time.
Notes: Aside from what it did to that mental patient, this is the first time it's actively harmed a person. D-3 didn't really have time to do anything that pissed it off, either. Did it just get hungry? - Dr. ███████

Addendum:: Anyone pranking nervous personnel by pretending to see SCP-372 in front of them will be severely reprimanded. —O5-█