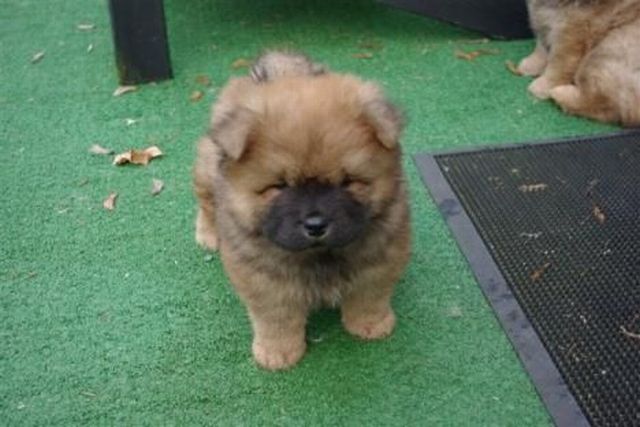 Every two hours, SCP-367 is to be provided with one (1) kilogram of "feed", which may be composed of any available bio-matter. In the event that no suitable bio-mass is available, other items may be provided for consumption and CST A-11 is to be placed on stand-by in case of rejection behavior by SCP-367. SCP-367 is to be weighed after each feeding period to monitor weight and density increase leading up to division.

Additional instances of SCP-367 forming in containment are to be disposed of. No unprotected interaction with SCP-367 is to be undertaken unless it is within thirty (30) minutes of a feeding period. SCP-367 may not be removed from the containment area without approval by Site Command. No instances of SCP-367 are to be released to staff for any purpose other than testing.

SCP-367 appears to be a small dog of variable breed, most often appearing as a small, brown puppy. SCP-367 exhibits a slightly elevated appetite and activity level for a dog of its apparent age and size, and does not sleep, but otherwise behaves as expected for a dog.

SCP-367 is a massive single-celled organism, composed of what appears to be a mass of "yellow slime" with several white "threads" suspended in it, with a semi-solid sphere of gray material in the center, deemed the "Nucleus". It is unknown what SCP-367 is made of, or why its outer "shell" appears to be a juvenile dog; however, testing [DATA EXPUNGED] further investigation. The "strings" appear to function as the muscular-skeletal system and under most circumstances the movement and general behavior of SCP-367 are indistinguishable from a normal dog.

SCP-367 is capable of feeding on any solid matter, and has shown the ability to dissolve and digest concrete, steel, titanium, carbon fiber, bone, wood, [DATA EXPUNGED]. When presented with an item that cannot fit into the external shell’s mouth, or be broken down with the teeth, SCP-367 will project pseudopodia from its internal mass and break down the matter into a consumable form. It is unknown how this occurs, as no acid is used, but it appears to be a disruption of the basic atomic bonds of the matter which is still under investigation.

SCP-367 does not increase in size when consuming items, but does increase in density. In addition, SCP-367 does not produce any waste. After consuming enough material to double its starting mass, SCP-367 will find an isolated location, such as in a cabinet or under furniture, and liquefy its outer shell. It will then divide into two equal masses and reform its outer shell, creating two instances of SCP-367.

If SCP-367 is left without food for more than three hours, the internal "strings" will project from the "eyes" and "mouth" areas of SCP-367 and attempt to bore into and break down all nearby matter. In this state, SCP-367 is highly aggressive, and has been observed to [DATA EXPUNGED].

Notes on recovery: SCP-367 was recovered from the residential home of Ms. Myra Bancroft in Ireland. Mrs. Bancroft was reported missing several days before, and Foundation staff established containment of her residence when it was reported that she had over eighty small dogs in her home, which had consumed her corpse and most of the home. A single instance of SCP-367 was recovered, with all other instances eliminated via CST A-11.

Ongoing monitoring is in effect to isolate any remaining SCP-367 outside of containment.