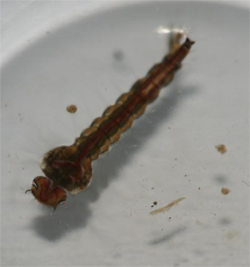 A larval stage specimen of SCP-366

All SCP-366 specimens, regardless of stage, are to be stored in a Level 4 Biological Hazard freezing unit at Biological Research Site-66. Cryopreservation is to be achieved through freezing in liquid nitrogen at a constant temperature of -196 °C to prevent activation. Due to the diminutive nature of SCP-366 ova, these specimens are to be stored in a near vacuum class III biosafety cabinet to avoid accidental dispersion, in addition to cryopreservation as outlined above.

All specimens and infested hosts are only to be handled by authorized personnel wearing Level A hazmat suits with SCBA, and all personnel involved in the handling of SCP-366 are to be scanned by MRI for possible infestation before entering and after exiting containment facilities.

If an infestation is detected, specific procedures are to be followed depending on the sex of the host. Males are to be detained and subjected to a dual inguinal orchiectomy by resident Level 3 or higher medical staff. All medical offal is to be disposed of according to the HazB-Inf/142b protocol. A secondary scan for infestation is to be performed after recovery in quarantine to verify the success of the procedure and to rule out residual infestation. Females found to have suffered infestation are to be likewise detained and placed in quarantine under medical observation 24 hours per day until such time as an ABE-366 event occurs.

Should signs of an imminent ABE-366 event be detected, the host is to be sedated using benzodiazepines, the dosage to be determined by the resident head of medical staff. The host's quarantine cell is then to be evacuated of all personnel. Due to the dangers of hearing loss, immediate containment of SCP-366 specimens exiting the host's body is essential. Post-event, both the host and any affected personnel are to be screened for (continued) infestation and treated accordingly. If no such infestation is detected and the host survived, class-A amnestics may be administered and the host need no longer be detained. No special social reintegration procedures apply.

As locations where SCP-366 ova are deposited shift if sealed off permanently, containment of these areas focuses on detection, quarantine of hosts and containment of specimens. If celestial events known to trigger the appearance of SCP-366 ova can be foreseen, sites are to be closed down temporarily. If need be, ova may be harvested for research. In all other situations, ova are to be allowed to expire before sites are declared open again.

If infestation is detected outside of Foundation control, hosts are to be detained and subjected to the stipulations above. The procedures outlined above are then to be applied to locations linked to these cases.

Critical infestations occurring outside of the Foundation's control warrant a full quarantine of all individuals in contact with the deceased. If necessary, temporary research and detainment sites are to be established around large-scale hotzones.

SCP-366 refers to a human endoparasite of unknown, possibly extraterrestrial origin that starts its lifecycle in an ovum stage. In male hosts, ova can develop into a larval stage. In female hosts, larval stage specimens may transition to the adult stage. Larvae introduced to male hosts and ova introduced to female hosts live at most three hours before expiring due to a lack of the hormones necessary for their further development. Attempts to cultivate infestations in other organisms have not yielded any results, with SCP-366 specimens of any stage expiring as expected when outside a human host.

Ova measure approximately 1 micrometer in diameter and have never been recovered unfertilized. When encountered outside of a host, ova are dormant with the embryo in developmental stasis. Larvae measure between 0.1 - 0.2 mm and display physical characteristics of the larvae of Ochlerotatus cantato. Despite this resemblance, research has indicated no DNA matches with that species nor any of its family. Adult SCP-366 specimens resemble the larvae of Tenebrio molitor though they are significantly larger (9.3 cm - 14.8 cm). Again, this resemblance is superficial only.

Upon introduction of SCP-366 ova to a male host via inhalation or ingestion specimens travel through the body to settle in the testes. An ovum stage specimen monitors its host's testosterone levels for between 27-32 days. After that period of time, any significant increase in testosterone over the usual levels will trigger a transition to larval stage. SCP-366 larvae lie dormant in the testes, waiting to be transmitted to a female host. Symptoms that male hosts may display at this time include muscle pains, fevers and a small amount of blood in the host's urine. Larva developed in male hosts are transmitted to female hosts through ejaculation. If ejaculation does not occur, larval stage specimens will remain in the host's system indefinitely, waiting to be transferred to a female host. Lifespan has not as of yet been established for these larvae.

SCP-366 infestation in female hosts occurs after unprotected copulation with infested males. Larvae transmitted in this manner attach to the lining of the uterus and feed on the host's output of 17ß-estradiol to grow to their adult form. An infestation with adult specimens produces symptoms resembling pregnancy which may include:

During this gestation period the SCP-366 specimens present in the uterus will display ovophagous behavior, with the larger and stronger specimens killing and assimilating weaker ones. This process continues until only one specimen survives. After three to six weeks, the remaining adult specimen leaves the host in an ABE-366 event. Specimens birthed in this manner will take flight through unknown means and attempt to gain access to the open sky. If successful, specimens will ascend towards the [REDACTED] system at an average rate of 114 km/h. Research using tracking devices attached to birthed specimens has yielded little result, with signals lost in the vicinity of [REDACTED]. Specimens prevented from reaching the open sky will produce a sustained high-pitched sound at approximately 101 dB.

An infestation is designated critical if abnormally elevated levels of 17ß-estradiol in males cause larval stage specimens to develop into adult stage prematurely. These cases are invariably fatal to the host as large numbers of immature adult stage specimens leave the host's body in an abrupt mass exodus. There was only one recorded critical infestation amongst infested males in Foundation custody.

SCP-366 ovum stage specimens can be found exclusively in the state of Massachusetts, always at exposed locations known locally for adolescent sexual activity. Certain celestial events, such as meteor showers, may trigger the descent of SCP-366 ova. The amount of ova deposited during these events ranges from approximately 1.000 to 10.000 depending on the level of activity at the location. The exact origin of the ova remains untraceable at this point.