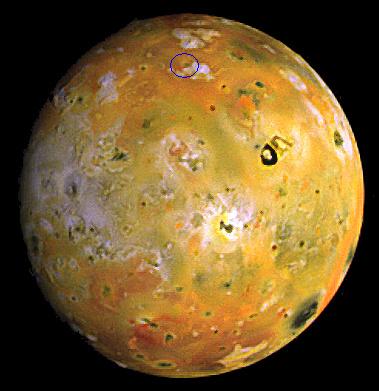 Surt (circled, near top center) is on the side of Io that always faces Jupiter. For scale, Io is 3642 km in diameter, slightly larger than Earth's Moon.

Since SCP-364 cannot be reached by humans, containment measures consist primarily of finding and suppressing any information about SCP-364 before such information can be publicly disseminated. Foundation assets have been inserted into all major space agencies and most private space exploration companies, with standing orders to report back on any actions planned or being carried out that could potentially expose SCP-364. A task force has also been set up to monitor actions by amateur astronomers, although the chances of independent discovery of SCP-364 from ground-based installations are quite small.

SCP-364 is a point several hundred meters above the volcano Surt on Io, the innermost of Jupiter’s Galilean satellites. At irregular intervals, varying amounts of material (up to 4000 cubic meters at a time) spontaneously appear at this location and settle into Surt, where the material is incinerated by the lava flow from the volcano. The mechanism by which this material appears is not known, and no permanent physical structure has as yet been detected near SCP-364, at any other location on Io, or anywhere else in the Jovian system. In addition, no unusual energy emissions have been detected coming from SCP-364 or the surrounding area.

The material that appears is usually a heterogeneous mixture of substances, including metals (particularly ferrous and titanitic alloys), organic compounds, siliceous compounds, and several unknown materials (though spectrographic analysis suggests that these may include stable super-heavy elements). On at least four occasions, probes have detected marks on the material that appear to be a written language in an unknown script. In addition, a strong correlation has been discovered between the thermal output of Surt and the appearance of material at SCP-364. Although any potential causative relationship between the two phenomena is purely speculative, evidence collected to date overwhelmingly suggests that the material that appears at SCP-364 is artificial in origin.

History: The existence of SCP-364 was first suggested in 1979, following the fly-by of Jupiter by the Voyager 1 probe. Unusual activity on Io had been picked up by [DATA EXPUNGED], part of a clandestine package of instruments added to both Voyager 1 and Voyager 2 by Foundation assets. However, the existence of SCP-364 could not be confirmed until the Galileo probe reached Jupiter in December 1995, using data and images collected by Galileo during its initial pass of Io. None of these images or data were released, the official story being that no images were taken in the first place.

While Galileo was left to continue its original mission around Jupiter, Foundation personnel worked with high-ranking NASA officials to develop and launch two more probes to Io, specifically to study and monitor SCP-364. However, to avoid suspicion, these missions to Io were announced and treated as exploratory missions to Mars. In late 1999, both the Mars Climate Orbiter and the Mars Polar Lander appeared to crash land on Mars due to "human error", when in actuality both spacecraft continued on their way to Io, reaching Jupiter in 2007. Galileo had already been sent to its destruction in Jupiter’s atmosphere by this time, but the two "Mars" probes continue to send back data from Io and SCP-364. The replacements for these probes are already [DATA EXPUNGED].

Note: Because Io is constantly subjected to heavy radiation and Jupiter's formidable magnetosphere, any spacecraft sent into orbit around Io would be very short-lived, and the two probes up there now are in orbit around Europa and Jupiter. Thus, constant observation of SCP-364 is not possible, but this is not a major issue while SCP-364 remains immobile. A more pressing concern is technology: how long will it be before anyone in the world can point a next-generation telescope at Io and be able to resolve 10-meter-long objects from the Earth's surface? Plus, who's to say that whatever is sending that stuff to Io couldn't send it somewhere else? —Dr. Blanchard