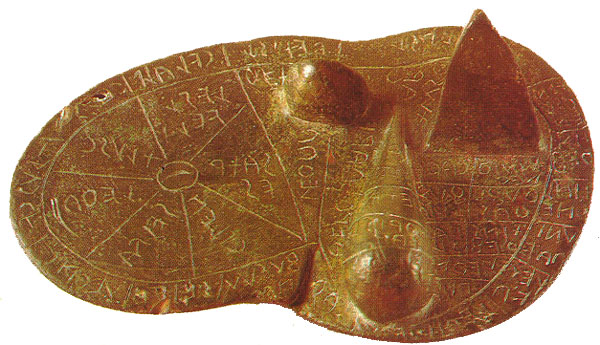 SCP-361 is a bronze Etruscan artifact, in the shape of a sheep's liver. SCP-361 is covered in the names of Etruscan gods and instructions for various religious rites, and is believed to have served as a tool for practicing haruspicy- divination using animal organs. SCP-361 bears a strong resemblance to the non-anomalous artifact known as the Liver of Piacenza, with which it was originally found during the late 19th century. Both artifacts date to the 2nd-3rd century BCE, to the province of Piacenza, Italy.

SCP-361's anomalous properties manifest if it comes into contact with a sheep's liver, removed no more than three (3) hours before interacting with SCP-361. When such contact is made, SCP-361 will vocalize (in a language and tone appropriate to the one introducing the liver to it) a set of instructions meant to achieve contact with one of the gods or spirits depicted in the writings covering it, through a service it refers to as "HarusCo". If these instructions are performed correctly within a period of thirty (30) seconds, SCP-361 will provide a new set of instructions. SCP-361's instructions will grow increasingly convoluted and/or nonsensical, until becoming almost impossible to perform under the given time limit. Failure to follow an instruction will cause SCP-361 to become inactive for a period of twenty-four (24) hours.

Stage 1: A sheep's liver is introduced to SCP-361.
Vocalization: Welcome to HarusCo! Your sacrifice is very important to us! For Tinia the Thunderer, please perform a horizontal incision on the offering. For Aita of the Underworld, please perform a vertical incision. For Maris, lightly cover your offering with the ash of a dead warrior related to you by blood.

Stage 2: A horizontal incision is made.
Vocalization: You have selected Tinia. For your weekly meteorological divination, please singe your offering over an open flame for five seconds. For warning bolts, please place a green olive on the altar. For beseechments and beneficial interventions, please attach a written consent from the Consulate Gods. For Catastrophes, please remove the head of an adult ox and hold.

Stage 3: The liver is singed over an open flame.
Vocalization: You have selected weekly meteorological divination. For your local forecast, please perform the seven sacred rites of Tinia while avoiding the anger of the mildew spirits. For forecasts for other areas, please perform the rites upon a boat of three masts or more. For a marital forecast, please consult with your local priestess of Uni.

Stage 4: Researchers were unable to comply with the instructions in the given time frame.
Vocalization: No input was received, this sacrifice will be disconnected. Thank you for using HarusCo, Rasna's #1 divination and deistic petition service for more than two thousand years! The Gods are looking forward to your next call!

Addendum SCP-361-A In order to examine the limits of SCP-361's ability to alter the language and tone it uses to interact with its user, a subject with a similar cultural origin to SCP-361 was required. For that purpose, a request for interaction between SCP-361 and SCP-1510, the persona of which originates from the same general area and time period, was made and accepted.

Stage 1: Subject D-1510-104, wearing SCP-1510, introduces a sheep's liver to SCP-361.
Vocalization: SCP-361 vocalizes in Classical Latin, the language spoken by SCP-1510-1. The instruction is translated to "Son of Romulus, speak the words thy father taught you, and your watcher will speak, his words carried by our spirit."

Stage 2: SCP-1510-1 chants several phrases in Latin, later identified as an oath to Mars Gradivus.
Vocalization: SCP-361's instruction is translated to "Place the aspect of your watcher at his feet, so he might see your altered form."

Stage 3: SCP-1510-1 requests an open flame. He is given a camping gas lamp. SCP-1510 places the lit gas lamp at the feet of the table SCP-361 is placed on.
Vocalization: SCP-361's instruction is translated to "Speak the duty of your watcher, so he might judge your worthiness.".

Stage 4: SCP-1510-1 speaks a Latin phrase, later identified as Mars Gradivus' oath: to guard, preserve, and protect the state, the peace and the senate.
Vocalization: SCP-361's instruction is translated to "Show your watcher that you do not stand alone; Does he who guards your left carry with him your watcher's conviction?"

Stage 5: SCP-1510-1 requests one of the supervising researchers to enter the room and touch SCP-361. Request granted.
Vocalization: SCP-361 speaks in a different voice, still in classical Latin: "Courage, Publius. This too shall pass. When rust claims your soul at last, valor will make you into Aeneas, and carry you beyond these shores, to rest among your fathers." The voice was later identified by SCP-1510-1 as the voice of the persona's father.