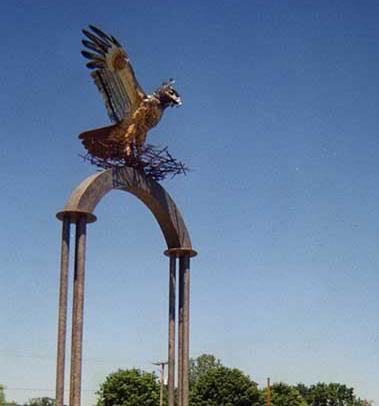 SCP-359 at rest, prior to containment

SCP-359 is to be contained within a 30mx30mx30m concrete structure. This structure is not to be entered between the hours of 9:00 p.m. and 6:00 a.m. local standard time. Any monitoring of SCP-359 during these hours is to be done via security cameras installed within the structure.

SCP-359 is to be fed one adult pig every other day. Acceptable substitutions to this diet must be cleared with Agent ██████████ and Dr. ██████████. All remnants of SCP-359's prey are to be completely cleaned out of the containment structure by 8:45 p.m. the following day.

SCP-359 appears to be a metal sculpture of a red-tailed hawk (Buteo jamaicensis) with a wingspan of approximately 4.3 m, perched atop a 12 meter arch. During daylight hours (approx. 6:00 a.m.-9:00 p.m. local standard time), it displays no signs of movement and does not respond to any external stimuli. However, it has been determined by the Foundation that between the hours of 9:00 p.m. and 6:00 a.m. it displays the typical behaviors of an adult red-tailed hawk, apart from being nocturnal. SCP-359 is apparently capable of flight - the mechanisms through which it accomplishes this have not been determined, as its wings are too short to allow for flight.

SCP-359 was originally located just south of █████████, ████ in the United States. It first came to the Foundation's attention when local foresters began finding dead bodies of white-tailed deer (Odocoileus virginianus) in the area within a 1km radius of the sculpture, which looked to have been preyed upon. The white-tailed deer has no natural predators in the state of ████. Investigation officially began on [DATA EXPUNGED] when motorists on the stretch of State Route ██ that passes by SCP-359 reported that the hawk was not on top of the arch. On the same day, a local farmer reported finding the sculpture in his field, standing over the body of one of his cows, which had injuries consistent with predation by a large bird of prey. The farmer was administered a Class A Amnestic and fed the story that the cow had died of natural causes, and its body eaten by coyotes. Route ██ was closed for "repairs," and SCP-359 was transferred to its current containment site and replaced with an immobile replica.

Addendum 1 Prior to containment, no evidence existed that SCP-359 had ever attempted to prey on anything besides hoofed mammals. However, since being contained, it has attacked, killed, and eaten four D-class personnel who entered its containment structure during restricted hours. Investigation into the cause of this shift in dietary preferences is ongoing.