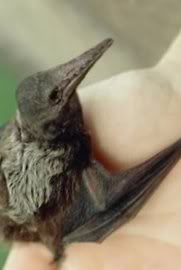 SCP-346 is to be kept in a store-bought birdcage at least 1m in height, and 1.5m in width either way. No locks or additional security measures are required, as SCP-346 is no stronger nor smarter than the average parakeet. SCP-346's cage is to contain at least two water dishes with standing perches, to be refilled daily, and fed a diet of five to six medium-sized live crickets daily. SCP-346's cage also contains one tree branch for perching, scratching, and climbing, one open-top nest (purchased at a commercial pet store) lined with moss, and a string with bright-colored bells on it for entertainment.

The bottom of SCP-346's cage is covered with corncob-based, biodegradable bedding and is to be cleaned out and replaced every other week. During cleaning, SCP-346 may be either held by hand, allowed to fly around a room with a closed door, or placed in a paper bag with a book over the end to be held out of the way.

SCP-346's cage is held in Dr. Rights' office, and may not be moved without her permission. Despite SCP-346's habit of nibbling fingertips and pulling strands of hair, SCP-346 poses no danger upon escape and may be recaptured, gently, with either a net or by hand.

SCP-346 is a small member of an unidentified family of pterodactyl- ancient flying reptiles. SCP-346 is approximately the size of a small bat, and has very lightweight bone structure. Although its head, wings, and legs are bare, its main body is covered with a soft coat of fur-like, dark colored down. The origin of SCP-346 is unknown, and was purchased by Agent ██████████ in a small pet shop in Brazil, being marketed under the name "Kongo-mato".

The owner of the pet store claims not to know where SCP-346 came from, having purchased a set of eggs off the black market (of which only one, SCP-346, hatched) believing them to be from a rare species of parrot. Some theories suggest that there may be a large colony of creatures similar to SCP-346 somewhere in South America.

Testing has revealed that SCP-346 is an adult, but appears to have had its growth somewhat stunted by malnutrition and being raised in a small, cramped cage. SCP-346 is also a male, and has been nicknamed by staff who find the little creature's appearance charming as "Pterry".

SCP-346 behaves in a manner similar to birds and bats, being most active at dawn and dusk, and energetically flying in whatever space it's given, snapping up insects either out of the air or off the ground and branches. SCP-346 chirps and squeaks in a manner similar to birds and rodents, and is most vocal during the evening hours. Some describe this as endearing, others as annoying.

Addendum 1 After the discovery of SCP-1265, some theories suggest that there may be a large colony of creatures similar to SCP-346 somewhere in South America. However, the existence of SCP-346 implies that these alleged colonies (should they exist) do not possess the same anomalous properties as SCP-1265.

Addendum 2 It has been suggested that further investigation into the origins of SCP-346 be taken, in the hopes of finding a large colony of similar creatures, perhaps indicative of a surviving member of the pterodactyl lineage, or a rip in space and time.